NEWS FROM THE COUNTRY.

Following the annual meeting of the local Soccer clubs, a week or so ago, clubs in the same code, have since been formed at Palmwoods and Mapleton, and as there is a likelihood of Nambour and Woombye following suit it will be the first time in the sporting history of the North Coast that a set of Soccer fixtures will be played. 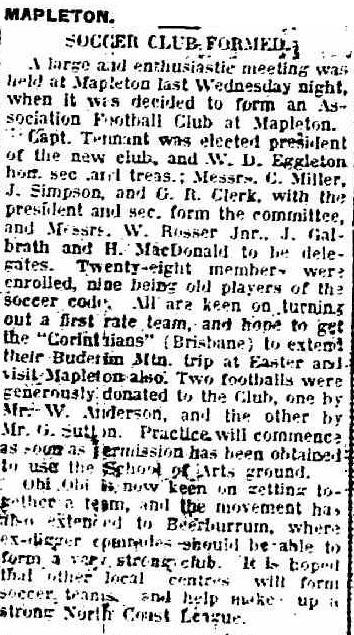 SOCCER CODE. A delegates' meeting of the Northern District British Football Association will be held in the Trades Hall on Saturday night.

The first report of the Metropolitan Soc cer Football Association, which was sub mitted at the annual meeting at the Sports Club last night, states:—

"The 1920 season proved prosperous, and it augers well for 1921. There is no doubt that last year will be historical in many respects. In the first place, the adop tion of the new constitution of the New South Wales Soccer Football Association, dividing the State up into separate and autonomous associations and giving each representation on the management of New South Wales S.F.A. proved a success. Heretofore Sydney was part and parcel of the N.S.W. Association, but now has equal representation with the other affiliated branches. It gave the Metropolitan Association a considerable advance in organising in the metropolis, and enabled the management of the association to develop the game."

Westralians in the German Pacific

We found the Rabaul Malays, who are employed by Government department and large trading stores at clerical work, accountancy, draughting; etc., a cultured and capable lot, attired always in spotless, white suits and straw hats. The Malays can boast of a very fine string orchestra and a first-rate soccer football team. It was quite a common thing at Rabaul to witness a football match between the garrison on a warship and the Malays. They generally took a lot of beating, and I believe honors remain about "easy."