A PIECE of state soccer history, honouring the nation’s wartime sacrifices, has been located in suburban Adelaide and there are growing calls to preserve it for future generations.
On August 3, 1941, the SA Soccer Football Association planted 125 white cedar trees at Rowley Park as a tribue to local players who had enlisted to serve in World War II.
But within eight years the Brompton venue, which had initially been intended to become the home of SA soccer, had been leased off and converted into a speedway track.
While the association moved 3km to the now Hindmarsh Stadium, the trees were thought to have been swallowed up by the housing development that took over the site in the 1990s.

That was until a discovery by Melbourne-based soccer historian Ian Syson last week, who spotted a number of them still standing in and around dwellings on the former ground.
“We thought probably the trees had been chopped down to make way for the new housing estate,” said Dr Syson, a retired academic from Victoria University.
“But there are still scores of those trees left and they’ve built the new housing estate around the trees.
“Each of them was planted to represent a South Australian soccer enlistment in the second World War.
“If each tree is for a soldier, some of those trees would represent a dead soldier and someone killed at war.
“They have a sacred significance.”
Dr Syson’s images show the trees dotted around John Hindmarsh Frontage, Francis Ridley Circuit and Rowley Lane in the development, which borders Torrens Rd.
The FFA history subcommittee member, who is compiling a book titled Newcastle Soccer Anzacs, said the find had encouraged him to expand his project to cover other states.
He hoped acknowledgment on the site’s soccer history, similar to the plaque recognising its past speedway activity, would commemorate the memorial and protect the trees.
“It was actually a soccer ground before it was used for speedway,” said Dr Syson, who believed about 80 per cent of soccer players across Australia enlisted for military service.
“It’s important, but sometimes soccer doesn’t understand it’s own connection with this history.
“The AFL and the rugby league have built a connection with Anzac over the last 20 years or so, but soccer has stood by and watched.
“Soccer has as much right to claim an Anzac connection, because soccer basically halted itself during the first World War and the other codes not so much as they kept playing.”

Brompton Park and Ted Rowley and the 125 White Cedar Trees!

Rowley Park Speedway in Brompton was named after Mr Enoch Proctor (Ted) Rowley one of Australia's best known goalkeepers in the early days of Australian soccer.

During his eight years in Kalgoorlie (where his uncle lived) he became almost a legendary figure in the soccer world being regarded as WA's best goalkeeper, He also played 1 game of Aussie Rules kicking 10 goals but gave the game away and sticking with the round ball.
http://www.speedwayandroadracehistory.com/adelaide-rowley-park-speedway.html
On 3 August 1941, 125 white cedar (Melia azedarach) trees were planted in honour of enlisted soccer players in 2 rows at a ground owned by the SA Soccer Football Association in Brompton Park, Brompton, Adelaide, South Australia.
In 2019 this is located on Torrens Road between Kennington Ave and Coglin St in Brompton, Adelaide.
It appears that the rows of trees are to the left of the image along Torrens Road and on the Coglin Street side.

For the record, by November 1941 - 150 players and officials, 35% of the membership and officials had enlisted in the fighting forces of WW2.

Surrounding streets and parks are named after Ted Rowley including Rowley Lane (Brompton), Rowley Terrace (Woodville) and Rowley Reserve (Woodville).
And what of the 125 White Cedar trees?
It seems that these trees (and their seeds) still exist at the John Hindmarsh frontage, Rowley Lane and have spread through to Coglin Street.
Posted by Ian Syson at 06:53 1 comment: 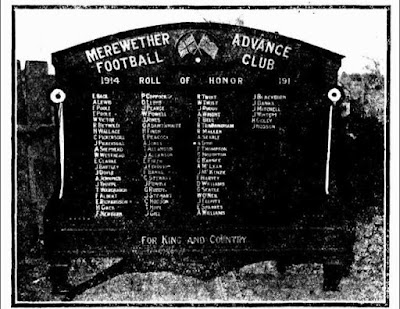 
NB. Here's a very specific one from WW2 "bearing the names of members of the South Australian Postal Institute Junior Soccer Club who have enlisted".
Posted by Ian Syson at 09:17 No comments: