British Association. For the first time in the history of "soccer" in this state, the Chairman of the South Ausralian British Football Association is Australian born. This honour was conferred on Mr. T. T. Thompson last week, and he is eminently fitted for the position. There was a large attendance at the annual meeting, and the number of "soldier-soccerites" was a noteworthy feature. Mr Thompson emphasized this fact, and observed that the good old English game would assuredly make rapid headway, and regain its pre-war popularity. It is considered more than probable that several new clubs will be formed during April. The former secretary (Mr. W. Ashworth) has consented to guide the association through the year. His report was adopted and the balance sheet proved satisfactory. Officers elected:—President, The Lord Mayor of Adelaide (Mr. F. R. Moulden); Chairman, Mr. T. T. Thompson; Vice-Chairman, Mr. W. F. Nightingale; Hon. Auditors, Messrs. W. Bills and W. F. Nightingale; Hon. Treasurer, Mr. B##### Secretary, Mr. W. Ashworth; and Assistant Secretary, Mr. J. D. Stewart.
Posted by Ian Syson at 12:19 No comments:

MONTHLY MEETING.
The monthly meeting of the Albany Town Council was held on Monday evening

The secretary of the Albany British Football Association forwarded a petition, under cover of a letter, protesting against the action of the Council in granting exclusive rights of the Parade-street reserve to the Australian Association, and contending that at least equal rights should be granted. The letter further requested that the Council receive a deputation at their next meeting, when a case would be stated. Received, and it was decided to receive the deputation.
The petition was ordered to lie on the table for a fortnight.

BRITISH ASSOCIATION ANNUAL MEETING.
The annual meeting of the Toowoomba British Football Association will be held in Herriott's rooms, Ruthven street, on Thursday evening. The business will be the election of officers for the ensuing year, the presentation of the balance sheet, and general. As the prospects are bright for a record season in 1920 a large attendance is requested.

Mr. K. D. Beaton, secretary of the Queensland British Football Association, reports that his body has secured the use of the Brisbane Cricket Ground for the next football season. The best premiership matches will be played there every Saturday, and interstate matches against New South Wales, and in all probability a New Zealand team, will be seen in Brisbane during the season.
The usual intercity matches against Ipswich and Toowoomba will take place, and altogether a good season's football is promised. "Soccer" football has a very good following in Brisbane, the gate takings whenever matches were played on enclosed grounds being proof of this. It must not be forgotten that there is a large population in Brisbane, of English and Scottish birth, whose only education in football has been "Soccer," and these people will not support any other game. In the circumstances the financial success of the "Soccer" people's venture is regarded as certain.

FOOTBALL SOCCER CODE.
A conference of Soccer Associations of the State was held in Sydney last week, Sydney, South Coast, Newcastle and Maitland all being represented. The chairman (Mr. W. Lincoln) explained that the conference was called with the object of forming a true New South Wales Soccer Association. The framing of a constitution was proceeded with in a satisfactory manner, all being desirous of seeing the State Association a true State body. The conference will be proceeded with to-day, when Lithgow and other associations are expected to send representatives. The first official entry for the coming season has been received, Cardiff third and under 18 grades having set the ball rolling. Cardiff have not had a team in the competition for a few seasons, and their re-entry is a welcome one, Secretary Williams expects great things from his teams, who are very anxious to "get going." Cardiff will quickly be followed by others. Registration forms are in great demand. Adamstown held their social and presentation of medals in Waugh's refreshment rooms. Among the large attendance was the Mayor. Alderman B. Saunders, and Mayoress, Mr. A. Cameron (ex-Mayor), Messrs. W. Brown (town clerk), L. Tamlyn (Northern Association), Major and Mrs. H. J. Connell, and J. Patterson (Charlestown). After the loyal toast was honoured, Mr. Bloomfield proposed success to the association, which was responded to by Mr. Tamlyn. The Mayor proposed "Adamstown Rosebud Soccer Club," Mr. J. D. Hamilton responding. Opportunity was taken to formally hand over to the soldiers' memorial fund the sum of £104, being the result of the club's effort. Mr. Brown. and Alderman Cameron, on behalf of the patriotic committee accepted the amount, and tendered their thanks to the Rosebuds Club for their splendid effort. The Mayor presented the second grade medals, and the nurse cup medals. Other toasts honoured were kindred clubs, the ladies, and the press. The members of the Rosebuds teams presented Mr. J. D. Hamilton (hon. secretary) with a fountain pen, Captain A. Smith thanked the Mayor for his attendance.

Meetings.
The annual meeting of the Port Kembla Homing Pigeon Society will will be held on the 24th inst., in the Club room. All members are requested to attend. A meeting of the Past-time Club was held on Wednesday in the Club room. Mr. F. S. Nicholson was elected president in lieu of Mr. Dan Murphy, and Mr. Langham was appointed vice president. It is proposed to give an exhibition on the 14th of April, the attractions to include boxing, wrestling, and horizontal bar displays.
With a view to forming a Soccer Club a meeting was held at Cox's residence last evening. An enthusiastic body of young men assembled to discuss ways and means. The movement is really a resuscitation of the Club, which existed here in pre war days. Shortly after the outbreak of hostilities the club disbanded owing to every player enlisting. An effort is being made to form two teams— a second and third grade. The A.L.P. intends holding a meeting on Sunday to further the candidature of Messrs, Davies, Cleary and Chalker.

SOCCER FOOTBALL.
The adjourned annual meeting of the Soccer Football Association was held at the Trades Hall on Saturday night. There was a large attendance of delegates, and the meeting proved to be one of the most enthusiastic ever held. This is due to the fact that Mr. Larry Tamlyn had again consented to take on the secretaryship after announcing at the previous meeting that he would not seek re-election. It was realised that if Mr. Tamlyn did not again take office the game would receive a big set-back, and there was great rejoicing when the announcement was made that he had again consented to act. The chairman announced that two nominations had been received for the position, Mr. W. Rushton being nominated by the Holmesville Club, and Mr. Tamlyn by the Hamilton Club. The secretary of the Holmesville Club asked permission to withdraw the nomination of Mr. Rushton, as his club was not aware that Mr. Tamlyn had decided to again stand. Mr. Rushton also stated that he would not oppose Mr. Tamlyn, and would also decline to accept the position of assistant secretary if Mr. Tamlyn was not re-elected. The chairman allowed Mr. Rushton's nomination to be withdrawn, and expressed his pleasure at being able to declare Mr. Tamlyn elected secretary again. General business was then proceeded with. The South Maitland Association wrote that they were not running any senior competition this year, and the application of Weston senior team to enter the Newcastle competitions was granted. Discussion ensued on the question as to whether 'club' or 'district' football should be played during the coming season, and upon a vote being taken, 'district' won by ten votes to six. The advocates of 'district' laid stress on the advance the code had made under the district system, and thought it would be bad policy to make any alteration. The proposed alteration of various rules was also keenly debated. Junior clubs were desirous of having themselves protected against the claims of senior clubs, and the present rule was altered to read: 'That any Junior team be allowed to form in any district independent of the district management, and that no junior be compelled to advance into senior or second grade without his written permission'. It was decided to play the competitions as last year, allowing the association to take one home game from each club if desired. A meeting of the Referee's Association is to be held next Saturday night, when Secretary Hughes will be glad to hear of any new members and welcome them to the meeting. The referees improved considerably last season, but their membership still requires increasing, and it is hoped that there will be a big muster at Saturday's meeting. Altogether there is a big time ahead for the round-ball game, and the ensuing season promises to be the most successful on record.


FOOTBALL. As advertised in another column the annual meeting of the Perth City United Football Club (British Association) will be held at the Sports Club. Viking House; William-street. tonight at 8 o'clock. The business will be the election of officers and the formation of a first-rate junior team. Members and intending members are cordially invited to be present.

FOOTBALL BOOTS.
The Famous Football Boots Dally M-22/6. Light, durable, with spring waist, the Dally M Football Boot is the player's ideal. A quantity have just been received.
They are to be cleared at 22/6.
Have you got yours?
Also at the same price, a new boot, specially suited to "Soccer."
Football Boots in our Men's "Boot Section, 1st Floor. 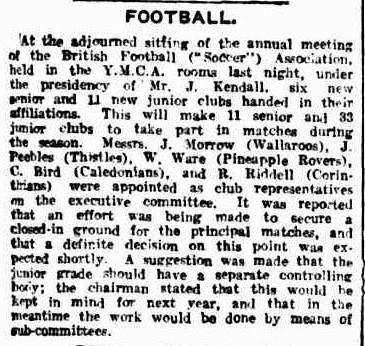 Football Gossip
SOCCER'S ENGLISH BOOM. The finishing contests in England appear to have worked up extraordinary public interest. Cabled that the cup tie fever has increased, recalling the best boom days. In the fourth round draw the most attractive tie is Tottenham Hotspurs v Aston Villa, on the former's ground. The club officials estimate that they received applications for 50,000 reserved seats within 24 hours after the draw had been announced. Only 5300 seats were available. Hundreds of people waited at the Hotspur offices on Monday on the chance that the team would be drawn to play on the home ground. As the Northern Union is also finishing a record season in the matter of public interest sport in England seems to have received a big lift by the war. Scotland and Wales, on Saturday, played a draw — one goal each. Willie Meredith played his 15th international game for Wales.
The annual meeting of the N.S.W. League (Australian Rules) is fixed for March 22. This body has re-secured Erskineville Oval and Hampden Oval, and a third ground is being arranged for.