International journal of the history of sport

The next issue is out soon and will contain an article by yours truly and a number of other, good soccer pieces. Make sure you check it out at your library. If its not available at your library, nag them.


The International Journal of the History of Sport
Volume 30, Number 5, March 2013
Australasia and the Pacific Regional Issue
Edited by Rob Hess

The ‘Chimera’ of Origins: Association Football in Australia before 1880
Ian Syson

‘Connected to Something’: Soccer and the Transnational Passions, Memories and Communities of Sydney’s Italian Immigrants
Francesco Ricatti and Matthew Klugman

Against the Run of Play: The Emergence of Australian Soccer Literature
Paul Mavroudis

Organising Sport at the Olympic Games: The Case of Sydney 2000
Stephen Frawley

Soccer Kicks Off in Bendigo 1902

Information has come to light that establishes soccer in Bendigo a little earlier than previously assumed, in May 1902. This is a period in which soccer is virtually absent in Melbourne but is starting to crop up in outlying towns and regions. The Bendigo Advertiser announces:

English Football.—An endeavor is being made to form an English Football Association in Bendigo. The matter took definite   form on Friday night, when a well-attended meeting was held at the City Club hotel. It was explained that the proposal was to form an association, comprising four teams, of 11 men each. The teams will be composed of a goalkeeper, two back men, three half-backs, and five forwards. It is the intention of the promoters of the movement to play in strict accordance with the   rules of the English Association game. A few particulars as to how the game is played may be of interest. In the first place, a round ball is used, and no player, excepting the goalkeeper, is allowed to handle the ball. In the event of a player violating   this rule a free kick is awarded. A goal is secured when the ball is sent between the uprights and beneath the crossbar. The five forward men act as followers. The game is immensely popular in England, where some of the premiership matches are witnessed by thousands of spectators. A meeting of those desirous of joining the association will be held at the City Club hotel to-morrow night. (Monday 19 May 1902)

A meeting was held at the City Club hotel, for the purpose of forming a club to play the English association game of football in Bendigo. Thirty-two were present, and the following office-bearers were elected: — President, Dr. Hinchcliff; vice-presidents, Messrs. Sternberg, M.L.C., A. S. Bailee, M.L.A., J. R. Hartley and D. Paterson; hon. secretary; Mr. A. Atkinson; treasurer, Mr. H. L.  Atkinson. A practice match will be hold at the Sydenham Gardens to-day, cabs leaving the fountain at 2.30 p.m. When local players become more proficient, it is intended to give expositions of the game before the senior premiership matches on Wednesday afternoons, and so help to popularise the new game.

There are a couple of noteworthy points to be made. First, the committee is made up of local community leaders and politicians, giving a strong sense of how significant a development this was seen by some in the community. Secondly, the implied good feelings and co-operation of the local footy association in helping to promote the new game can be contrasted with less co-operative attitudes in other times and places.

Though co-operation was not universal. On 31 May The Advertiser reported that:

In Bendigo the movement to establish an English Association was at first received very coldly, but the practice matches held  during the past few weeks have revealed the   interesting features of the game, and so awakened interest that the Association now boasts well over the requisite four-team strength—44 players. At these matches some of the men displayed remarkable cleverness for beginners. Without submitting to the temptation to   wander from the allotted positions, the young players embraced every opportunity of working the ball into their opponents' territory. Many of them give promise of developing into fast and useful players.

So while there was some opposition this seems to have wavered and the game sems to have made significant progress in a short time.

On June 4, the Association plays in 'colours' for the first time. The colours chosen certainly indicate an affinity with the English Public School system on the part of some of those involved.

ENGLISH ASSOCIATION GAME.
The newly-formed English Association engaged in a practice match at Back Creek on Wednesday, when the players made their first appearance under colors. The A team, captained by Fred. Pierce, was arrayed in Oxford and Cambridge blues, while the B team entered the field in neat-looking   chocolate and gold singlets. The game lasted 80 minutes, and was fast and interesting throughout. The teams are rapidly becoming   accustomed to the points of English  Association football. The play all round showed a marked improvement on previous exhibitions, and penalties were seldom  necessary. With assiduous training and close attention to the rules of the game, the new association should provide some interesting matches during the ensuing season.

Now that the association has established itself in Bendigo, a plan of the playing field may be of interest to those unacquainted with the game. By the plan shown below it will be seen that at the commencement of play each team occupies half of the field, the five forwards on each side facing each other close to the centre line. The single player on the extreme back line represents the goal-keeper. In the practice match on "Wednesday the positions of the players were as follows: —

PLAN OF THE FIELD.

Later in June, the game is exposed to the public for the first time as a preliminary exhibition match before the South Bendigo v Eaglehawk footy match.

FOOTBALL.
To-day's Matches.
This afternoon patrons of football will be afforded an interesting display by the members of the newly-formed English Association team, who will make their first appearance in public, and will play a match between the A and B teams from 2.30 till 3.-1-5. The teams have been practising diligently since their formation, and spectators will have a chance of comparing the English Association game and its different points with the Australian game.

Similar exhibition matches are played throughout the season.

In what is a fairly typical narrative structure of these kinds of stories, the first year of soccer in Bendigo is a success. Establishment, the recruitment and training of players, exhibition matches and a reasonably successful season all indicate a healthy beginning. Yet it seems to come to nothing. Soccer is nowhere to be seen in Bendigo in 1903 and it is not until 1912 that we can find another archival reference to the game being played in Bendigo.

The 1912 game was previewed in the Advertiser:

SOCCER MATCH.
Arrangements for the exhibition game of British Association (Soccer) football, in the Upper Reserve next Wednesday, between a team from the surrounding district and a metropolitan combination, in aid of the Watson Sustentation fund, are well advanced.
This will be the first occasion on which this class of football has been played in Bendigo.

At last night's meeting of the Miners' Association committee the Bendigo Football Association was severely criticised for its action in postponing one of its matches from last Wednesday for a week in order to run counter to the Soccer fixture.

A typical mistake is made in this report. As we know soccer was played in Bendigo in 1902 something that the newspaper could have established by looking at its own archives or consulting long term residents. Yet it's a mistake that gets made across the country across the Twentieth century. Soccer is a game whose re-establishment can only ever be understood as a new, brand new enterprise.

The 10 years had also seen much change. The term Soccer had replaced English Association Football. More importantly, the pressure of new waves of British migration had seen soccer's stocks rise in the metropolitan regions. The rhetoric and practice of soccerphobia were starting to rise within footy communities. The local footy association's manipulation of fixtures to "run counter to the Soccer fixture" (a charity game) is a forewarning of the kind of battles that soccer has had to fight since that time.
Posted by Ian Syson at 14:05 No comments:

This one speaks for itself 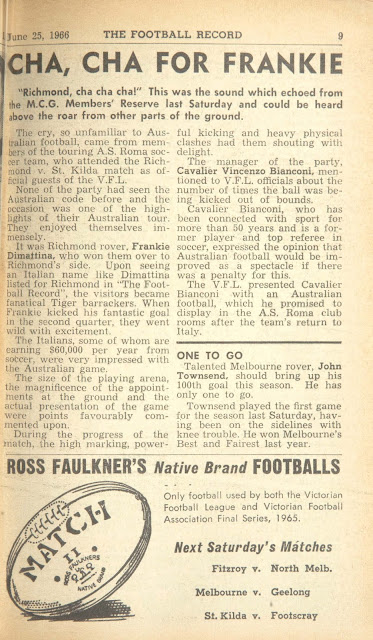