The 1914 Dockerty Cup between Northumberland and Durham United and Melbourne Thistle played at Middle Park was a scoreless draw. The replay at the same venue had a similar scoreline even after extra time. A goalless 210 minutes was enough and the decision was made to share the trophy. Harrison in The Winner was not impressed with the games (see below) but I have seen reports that were more glowing. The Argus for example.

The following is the report from The Winner, Wednesday 14 October 1914, page 6

... THE CONTEST Only a few items occurred in the whole course of the two hours' play to send anyone into ecstasies. I had looked forward to far more scientific play than proved to be the case, and was disappointed. True, cup finals as a rule do not produce the best class of football; the players are far too keen and excited, and Saturday last proved no exception to the general rule. There was one thing, however, that was par ticularly noticeable, and that was that the respective goalkeepers — Robison and Russell-— were in great trim, and in that goal-keeping mood which meant that there would be some difficulty in breaking down their defences. And the two hours' play saw the respective goals intact In fact, if anything averted the defeat of the men of Northumber land and Durham it was the superb defence of Robison, who really effected some wonderful saves. Robison was indeed the hero of the hour, and I have seen players of greater pretensions in English League teams who could not have improved upon his display. There is little further to comment upon. The best of the N. and D. side were Robison and Ben. Stevens. Others I liked were Helas, Longthorne. and C. Weston. On the Thistle side, Russell, in goal, did all that was required of him, and Raitt, Guthrie, Bottomley, Brodie and Ackurof [Acquroff] were always prominent.

A month later, the following images and text were published in the Winner, Wednesday 11 November 1914, page 7 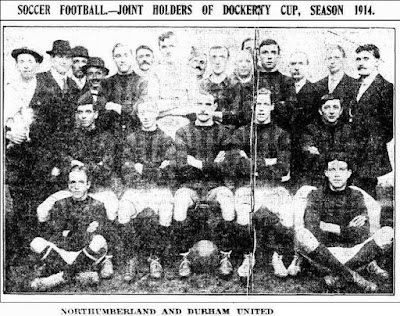 Northumberland and Durham United are a team which will have seriously to be reckoned with, in next season's competitions. The players registered in the ranks of the North of England representatives showed brilliant form in the latter part of the season, and in the final tie of the Dockerty Cup held their own with the Thistle Club, the League premiers. Northumberland and Durham United played 18 games in the League Competition, of which they won seven, lost nine, and two were drawn games. Their best form, however, was shown in the Cup competition, and the players appearing in the: above photograph in the final tie of the Dockerty Cup. are — Robinson, Helas,  Longthorpe, Thompson, Stevens, Jefferies, H. Weston, Laycock, C. Weston, Millar, and Marsden. 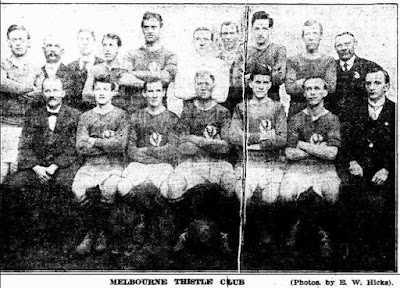 The Melbourne Thistle Club has a record to be proud of. To win the League Premiership and become joint possessors with Northumberland and Durham United of the Dockerty Challenge Cup in the same season is a great 'honor indeed. The Scots' Club, has only been in existence three seasons, and has in its ranks many players of exceptional merit.In the League season just closed, Thistle played 18 matches, won 11, lost two, and five were drawn. The team scored 34 goals against 12 obtained by their opponents. Thistle headed the League table with 27 points, to their credit, their nearest opponents being the Birmingham team with 24 points. The Scots' representatives figuring in the final the for the Dockerty Challenge Cup, is given in the above photograph, are— Russell, Thompson, Raitt, Noble, Goodson, Benn, Bottomley, Clulow, Guthrie, Sandy, and Brodie.

The first Footscray British Football Club (FFC) was founded in 1912. It survived for two years until the emergence of two new (and legendary) clubs: Footscray Thistle (FT) and Northumberland and Durham United (N&D). The connections are between the two new clubs and the now defunct FFC remain to be discovered. Also, to what extent did FT dilute the player pool at Melbourne Thistle (MT)? My hypothesis is that N&D (by virtue of their inclusion as a 1st Division team in 1914) was something of a continuation of FFC and that FT (as a 2nd division team) represented something of an A team for MT. I'll need to check the team lists. Let's see how that works out.