So South, who have been endlessly displaced by Victorian Major Events (who despoiled Bob Jane Stadium and removed Olympic Park in one fell swoop largely through the Machiavellian workings of Eddiot MGoo), and who have no control over ground maintenance at Lakeside Stadium are being blamed for the actions of some other body.

OK. So all is normal. What is interesting about the Rolfe piece is that the photo uses similar imagery to the one below showing the footy kids' resistance to evil soccer. 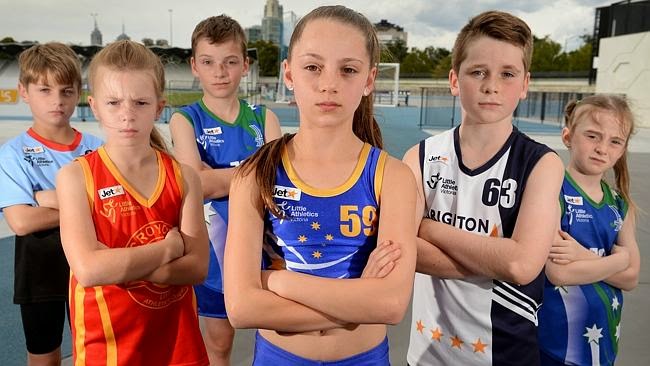 The Mav has also written about it on his blog from a South Melbourne perspective.

Won't somebody PLEASE think of the children!Some wonderfully sensationalist anti-sockah writing in the Hun recently. Basically, Little Athletics had the venue booked well in advance for their annual carnival, but the decision of the State Sports Centres Trust to resurface the grass on the arena and thus put out the Little Athletics people has not gone unnoticed by our citizen journalist, who's managed to rustle up a bunch of surly looking youngsters staring down the barrel of the camera with their arms folded at the injustice of it all.
Now I certainly feel for these kids, because they've obviously been put out by this decision, but the tone of the article which seeks to either directly or indirectly blame it on soccer (and therefore us) is so stupid it's mind boggling; unless of course, the article wasn't written by someone with an anti-soccer agenda. Did South get asked for comment? It doesn't seem like it. So no mention of the club's long tenure at the ground, no mention of the damage caused by the shotput, hammer and javelin on the turf during our winter season, and of course no mention of the fact that we have to share with athletics while Collingwood and Eddie McGuire get whatever they want.

Three years ago I wrote the following.

Here we go again. The Hun is frothing at the mouth about soccer on page 3 of today's issue, complaining that a historic footy club (Moonee Valley Football Club) is being threatened by the encroachment of the round-ball game. In many ways it repeats the complaints through the ages that "soccer is taking our grounds". It observes that "junior footy clubs everywhere wage a fight for territory against the 'world game'."

I've written about the Toorak Park episode in 1954 when the same arguments were being mobilised. Soccer wanted to share the grounds; footy wanted sole possession. 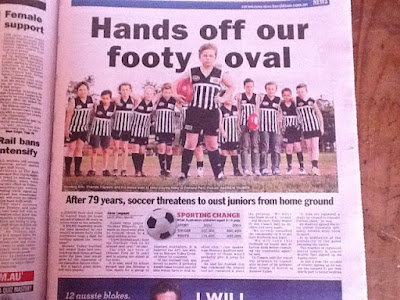 And of course it's largely rubbish. It's a beat up aimed to stir emotion. The council is merely investigating the options to allow soccer to expand to meet its demand; while the article promotes the idea of code war. Rather than "soccer threatens to oust juniors" it might have simply gone with "council considers options". The content differs from the headline and the confrontational pose in the photo. The problem is many readers will have formed their views on the piece simply from the headline and image. The damage has already been done, no matter how 'balanced' the content.

The content is not particularly balanced in any case. Unbelievably it makes no mention of the current co-tenant of Ormond Park, Essendon Royals Football (soccer) Club, whose membership dwarfs MVFC and makes it possibly the biggest sporting club in the region.

Radio station 3AW went with "Footy clubs threatened as Soccer soars". It warns that "More children in Victoria are playing soccer than our beloved Aussie Rules [which is simply not true] and the repercussions have begun."

The bottom line is that there are not enough sportsgrounds in the Moonee Valley district and at present they are allocated inefficiently. A process of rationalisation needs to occur. Footy needs to give a bit; soccer needs to be prepared to be flexible. The council has expressed a preference for Ormond Park to have sole occupancy. In all likelihood MVFC will get this (as is appropriate) and Essendon Royals will be shifted to a more suitable playing space like say Fairbairn Park.

As a summer game, cricket is just irrelevant to the issue.