Off to Quarries to see if Fawkner can get the three points and close in on Moreland City. If Clifton Hill can't get the 3 points today their promotion hopes will be slim. So there's a lot at stake. 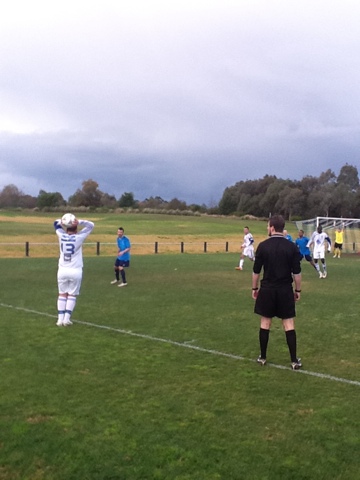 Fawkner ressies up 2-1 with about 15 to go. Clifton Hill arguing among themselves. Neither team looking likely.

Team sheets are below. 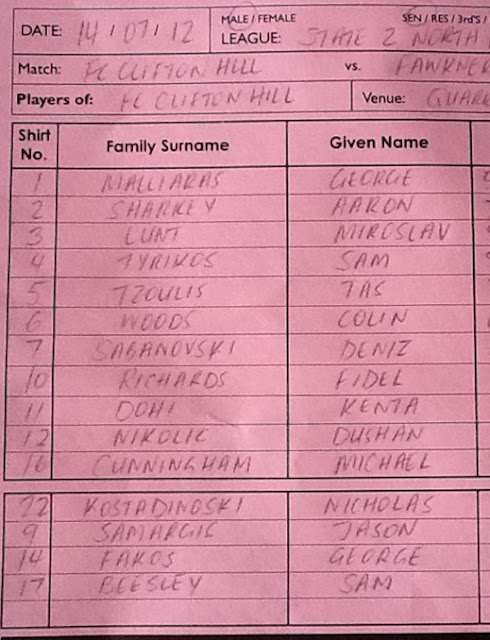 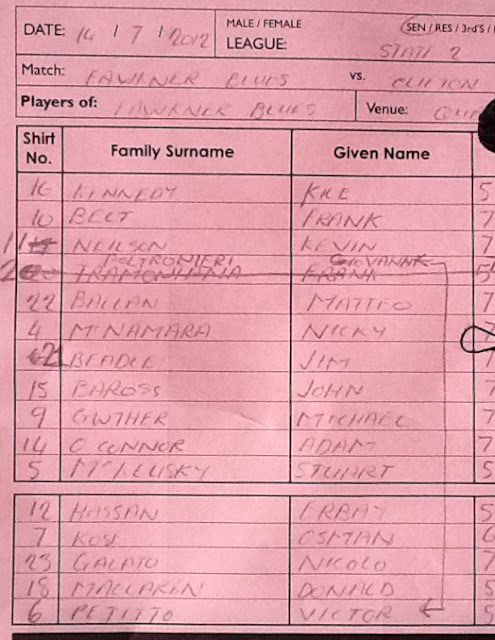 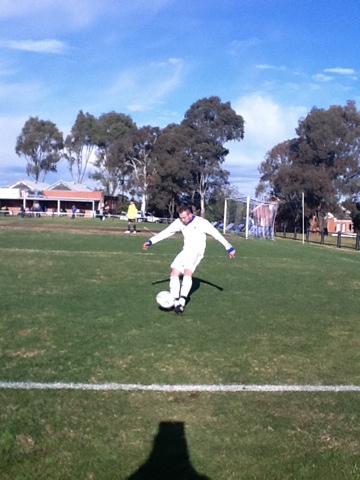 3.07. On cue. Fawkner break. Keeper calls for it and nearly mucks it up. Out for throw. Fawkner bring it back but Clifton Hill free kick.

Fawkner player Baross given yellow card for wearing skin colored shorts that are normally unseen under his blue shorts. Coyness forces him to the dressing room to remove them. Fawkner down a man for 2 minutes.


Game a midfield tussle so far.

3.12. Fawkner free kick 25 out on right. Floated in and keeper takes on the full.

Two biggish teams tending to cancel each other out. Fawkner trying long balls that Clifton Hill have managed to defuse. Though the feeling is that one may yet work. Clifton Hill not penetrating at all.

3.24. Clifton Hill free kick 30 out. Floated in and put behind unnecessarily for corner. Corner cleared.

Fawkner looking the better team. Their keeper has had nothing to do while the Clifton Hill keeper has been very busy.

3.32. Normal service resumed as Fawkner attack. Cross from right over forward's head. Out for goal kick.

Where have I been moment #564. I asked the Clifton Hill subs why Bobby wasn't playing. "He's left the club and gone to sunshine!"

3.42. Fawkner cross from left headed behind for corner. Foul by Fawkner in box releases pressure.

3.43  Rare Clifton Hill penetration deep on right. Nothing comes of it.

3.45. Clifton Hill's Dohi looks a good player. Not getting much chance to show his skills though.

A tight tussle that Fawkner shaded. Clifton Hill with little sense of penetration will need to figure something out if they want to win this. Fawkner has probably played too much long ball. Better football might have seen them score already.

4.08. Fawkner corner after good lead up. Headed over.

4.11. Fawkner free kick 30 out on right wing. Crossed. Headed back and after a bit of a scramble poked in.

The goal hasn't changed the character of the game. Fawkner still dominant though Clifton Hill looking slightly dangerous at times.

4.20. Dangerous cross from Clifton Hill's Dohi. Kennedy off his line well to intercept.

Clifton hill looking much brighter this half.

Clifton hill fight back. Two attacks in a row crosses from the left gave proved dangerous. Fawkner saved by a deflection and then excellent keeping and poor reflexes from the Clifton Hill forward. Offside in any case.

Clifton Hill don't seem to understand how dangerous they have been on the left. Dohi starting to have an impact. Fawkner starting to seem a little edgy. Not panicking yet.

4.43. Fawkner capitalizes on poor punched clearance by Milliaras. Good interplay and shot across keeper is wide.

4.45. Clifton Hill offside again! It's as if they don't know the rule.

Apart from a brief period Clifton Hill just werent in it. Fawkner should probably have won by more but they'll take it I guess. 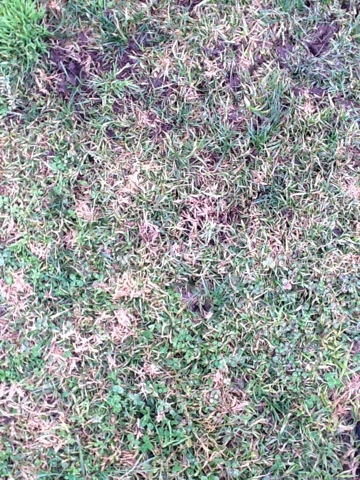 Is soccer the game that never "happened"?

This is something from the book I am writing on the cultural history of soccer in Australia. I'd be really interested in feedback (positive or negative). It's slightly pessimistic when excerpted like this but is embedded in a more positive context in the book.


Arrived at half time in the ressies. Altona East down 2-1.

Keilor score a good goal despite great effort by keeper. 3-1.

3.04. Underway. Phoenix running away from the golf course.

Good open game so far. Though my commo-fascist companions beg to differ.

3.33. Massive uproar. Was it a dive by the Keilor player?

3.41. Nice interplay up front for Phoenix. Out for corner. Foul in box fk to Keilor.

3.45. Goal to Phoenix. About 6 unnecessary passes before its slotted from a metre out. 1-0.

3.49. Keilor corner. Reminder that they had poor field position towards the end of the half.

4.09. Keilor scores but goal disallowed. Not clear why.

Keilor have lifted in response.

4.26. Phoenix corner left. Into side netting.

4.35. Good goal to Phoenix. Cross to Yabio. Cut back to Galea. Sidefoot placed beautifully into side netting. 2-0.

4.44. What looked a certain goal to Phoenix just wide. Unmarked man in box.