Six young ladies In Toowoomba are endeavoring to form a Soccer football team, and the nurses at the Toowoomba and Willowburn Hospitals are being invited to down swabs and thermometers once or twice a week and join in. There should be a great trade in hair-pads when the darlings of the Downs set to work at Soccer, for there is a lot of head work in the British game. The reporters will have to be very circumspect in their criticisms of the game; that is if they are males, for only a lady knows how another lady feels.

A meeting was held under the auspices of the Metropolitan (Soccer) Football Association, at the Sports Club, Hunter-street, last night, to consider the formation of a Women's Soccer Football Association. There were over 30 ladies present. Mr. W. Lincoln, president of M.F.A., presided, and other officials present were Messrs. G. K. Martin (hon. secretary), Mr. F. West (president M.J.F.A.), and K. Jones, F. Langford, W. McAllister, C. Robinson, W. Chapman, and E. Drew. The ladies watched the proceedings with interest, and were keen for the formation of an association. Some of them had played in Canada, New Zealand, Great Britain, and Melbourne. It was decided to form an association, to be called the Sydney Ladies' Soccer F.A. The following wore elected to the necessary positions: — President, Miss M. Alexander; hon. secretary, Miss D. Finigan; hon. treasurer, Mrs. S. Reed; management committee, Miss M. Thomas, M. Charters, B. Keogh, Z. Maine, and M. Bush. The ladies were given an invitation to attend two first-class Soccer football matches at, Wentworth Park Oval to-morrow. The first management committee meeting of the new organisation will be held next Monday at the Sports Club, and the first practice match will take place at Wentworth Park Oval on Tuesday night.

Quite a craze has set in in Sydney for the formation of women football clubs, and Brisbane has become infected with the idea through the Soccer code. Women play Soccer in Great Britain, and in France, in which countries the game is considered the most suitable for those women who want to play football. Both the Sydney and Brisbane Soccer Associations are alive to this fact, and in the former place a move has already been made in the direction of running women's clubs. The Queensland body considered the matter at its meeting this week. In the meantime, correspondence is invited from those girls who are interested in the formation of such clubs. 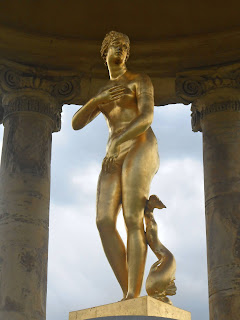 In England last season, the French women Soccer footballers defeated an English team by 2 goals to 1. A huge crowd witnessed the game. I remember reading a description of the match—or, at least, a description of the girls who. played in it. The writer was too much hypnotised by "bare knees, adorned by the most fascinating of dimples" to write much about the match itself. He described one French player as "the prettiest little thing who ever strayed off the cover of a magazine on to a football ground." Some kid! as the American would say. The football critic did not stop there. "She is the smallest member of the team." he wrote, "but has a figure like a more solid Venus di Medici." Ye gods!

What a crowd a few such players would attract at the 'Gabba.

The question has been raised whether or not the Australian girls are of a sufficient physique to play football. I was talking the matter over with an official of the Q.F.A. the other day and he pointed out that the Brisbane girl was not so big, strong, and well developed as the Lancashire girls. The English XI, which played France, it might be mentioned, was comprised mostly of girls from the factories of Lancashire, but although they were a heavier combination than the French women. they failed to win. This, of course, goes to prove that it is not always weight that counts in Soccer. Science is almost variably the deciding factor. The French team was drawn from the magasins and offices of Paris—long, thin girls; short, nuggety girls; big, lumpy girls; and dainty, shapely-girls.

Why, the smallest member of the French team Mdlle. Rigal, the girl with the "fascinating dimples," was the trickiest player on the field. Surely, in face of this, no one can deny that the material for women Soccer, teams is available in Brisbane.

"Miriam" (Kangaroo Point), as though anticipating my thoughts on the above subject, writes under yesterday's date, as follows: "I have been a constant visitor this season to the 'Gabba, and while watching the games there I have often thought what great fun it would be if the contestants were women instead of men. I notice that attempts are being made in New South Wales to form football clubs for women, but the only game of the different codes that appeals to me and most members of my sex, is Soccer. I should be glad if you would publish this letter in

your Soccer notes on Thursday-  if only Messrs. Kendal, Hildreth, and Co. make a move in the matter, I am sure you will find that quite a number of girls will come forward. Several of my friends have already made up their minds in the matter.

Word has been received in Brisbane that a movement is on foot to start women Soccer clubs in Toowoomba. The secretary of the B.F.A. in the Downs city states that several girls have approached him in the matter. An invitation has been issued by the executive to other members of the fair sex. who wish to play Soccer, to send in their names. It is hoped to form two clubs, almost immediately. 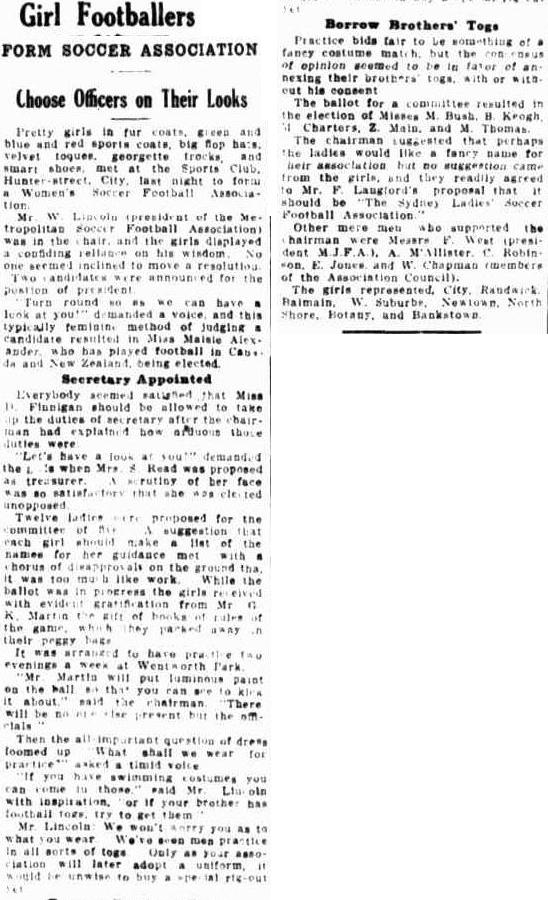 WOMEN FOOTBALLERS. A women's Soccer team has been formed at Balgownie (N.S.W.). They have arranged to play a match with a team of women from Woona.

POLITICAL LIBEL ACTION. A meeting called by Mr John Wren was held in the Sydney Town Hall to consider the steps to be taken as the result of the action for alleged libel brought by Mr T. Ryan against the Hobart 'Mercury.' The amount raised reached £1400, but Mr Wren states that Mr Ryan's expenses total £5000.

At a recent committee meeting no less than six requests were made by charitable bodies for assistance. Each asked for one gate on the Tramway ground. In the past the Soccer people haves never turned any similar request down. Six requests, however, broke the camel's back. Each body was, however, given permission to collect on the Ground, in turn. The United Charities have had their days, the Protestant Federation have had theirs, and this Saturday and next the Y.M.C.A. step in. Then came the Adamstown H. and B. fund. Each charity will receive some benefit as a result of the mode adopted, which is a fair one.

The Dockerty Cup matches drew a large number of spectators on Saturday, some interesting games being won. Windsor got safely through into the semi-finals, scoring 4 goals (Taylor 3, Maxwell) without response from Preston. For the winners, Peat and Black were very safe at full back; Scotchbrook beisng the best of a bustling line of halves. In the forward line, Taylor and Thomas made a very effective left wing, the former's first goal, a header from a centre by Thomas, being of the hall-mark variety. Maxwell, in the centre, was good, but the right wing was not up to form. For Preston, the outstanding player was Stirrup at full back, who tried hard to save his side from disaster. Hearne was the best of rather a poor line of half-backs, the best of the forwards being Doncaster, Benn and Smith.