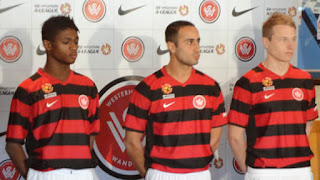 The new Western Sydney team's name has been announced and the club can now get on with the business of organising the less symbolic and more substantive aspects of running an A League team.

Like all such processes this naming has produced great consternation - something that is, admittedly, not all that difficult to create within soccer circles. While I didn't have a great stake in the outcome, I'm quietly pleased that the FFA has gone with the Wanderers. For once they might have got something right.

The Wanderers was the name given to the very first organised team in Sydney in 1880. Even the first game played by the team was out west, at the King's School in Parramatta.

In July of 1880, a movement seemed to emerge in Sydney. A number of letters to the editor of the Sydney Morning Herald were published, advocating the playing of football under the English Association rules.

This long letter from John Walter Fletcher published in the SMH on 17 July 1880 sums up the interest and takes the important step of suggesting a meeting. It is an important, if not founding, document.

TO THE EDITOR OF THE HERALD.

Sir,-I was glad to see in your issue of this morning a letter advocating the introduction of the English Association game into New South Wales, and I am a little surprised that some old English player has not made the suggestion before. I have reason to think from conversations I have had on the subject that if the game could properly be started it would become very popular, not only with players, but with the public. Unfortunately, a very general misapprehension appears to exist as to the nature of the game, a great many people I have spoken to evidently confusing it with the Victorian Association game, whereas the two games have not a single point in common. As to its chances of popularity, let any one read in Bell's Life the accounts of International or club contests in Glasgow, Sheffield, London, &c. witnessed often by from 10,000 to 12,000 spectators. It is, I think, about twelve years since the game was first started in England, though its principle, that football is a game for feet and for hands, had long existed in the Eton and Harrow games. At the present time the football players of Great Britain, playing under Rugby and Association rules, are about equally divided, and the two games exist side by side without one interfering in the least with the other, save that of late the value of good dribbling has become universally acknowledged in the Rugby game. I feel that we are rather late in writing in advocacy of the English Association game, inasmuch as a large sectïon of the football players of New South Wales, dissatisfied with Rugby rules, appear to have committed themselves to the adoption of Victorian rules. Nevertheless, there must be many old English and Scotch Association players, or old Eton and Harrow men, who would be glad to see their old game played here, and who would make an effort to introduce it; and I am quite sure that the principle of the game, which forbids the use of the hands, except by goalkeeper, and does away with scrummaging, collaring, mauling, &c, will commend itself to a very large section or this community. The game is essentially a scientific one, requiring, above everything else, unselfish and organized combination. I do not wish to attack the old Rugby game, which, properly played, is interesting and exciting to players and spectators; but must enter a protest against the introduction of the Victorian game, which, though certainly interesting and amusing to look at, is, I believe, rougher than the Rugby, and violates the fundamental principle of all games like football - I mean the law of off side. The very thing condemned under the name of "sneaking" in the Eton game is here encouraged and applauded, and in fact may almost be said to be the chief art of the game. In the brief space of a letter it is impossible to say all that one would in behalf of the introduction of the rules of the English Association; but I hope that, since at the present time a radical change is demanded in the present code, football players and the public generally will give the matter a more thorough investigation than it has yet received before committing themselves to the Victorian game. I should be willing to communicate with gentlemen willing to assist in starting a club under the rules of the English Association, and perhaps it might be possible to convene a meeting to consider the whole question. I am, &c.,

In what seems very little time a meeting is convened for 3 August.

A meeting convened by Messrs. J. W. Fletcher and J. A. Todd will take place this evening, at Aaron's Exchange Hotel, " to consider and promote the introduction of football under English Association rules." All football players and others who may be interested in the improvement of the winter pastime are invited to attend. (SMH, 3 August)

And two short weeks later, the first game is played with the second already planned.

The first match in New South Wales played under English Association rules was played on Saturday last, by the newly formed club, against the King's School boys at Parramatta. The visitors had a very fair team, allowing for the fact that hardly one of them had played football for some years. This advantage was, however, balanced by the fact that the boys had not played these rules before. The game was well contested for an hour and a half, and terminated in favour of the visitors by five goals to none; the number of goals must not, however, be taken as a criterion of the play, which was remarkably even, particularly after half time, the boys on several occasions only failing to score on account of their want of familiarity with the art of passing and middling the ball. On the side of the English Association Club all played up well, but the play of D. Roxburgh as back was remarkably good and invaluable to his side, and Scott's goal-keeping deserves praise. On the King's School side the play of Fenwick was very fine, and he would make a grand Association player; all, however, played well. Mr Savage, an old International player, played with and coached Kings School. The names of the club players were -T.A .Todd (captain), W.J. Baker, T.W. Fletcher, C.E. Hewlett, C.F. Fletcher, Wastinage, W. Robertson, W. Simson, Chapman, D. Roxburgh, J Scott (goal).


A match has been arranged, under English Association rules, on Moore Park, for next Saturday, against the Redfern Club. (SMH, 18 August)

Interestingly the team did not yet have a name. This situation was rectified at a meeting on 19 August at which the name was determined and a number of other decisions were ratified, including the decision to seek membership of the Football Association:

A committee meeting of the newly-formed English Association Football Club was held on Thursday evening last, at which the following resolutions were proposed and carried -

The first game under the new name saw the team score another win, this time against a team from Redfern FC.

REDFERN v. WANDERERS.-The second match under the English Association Rules took place at Moore Park on Saturday last, and resulted in a win for the newly-named Wanderers by two goals to nil, both of which were secured in the first 10 minutes, after which the game was very even. Redfern Club, being strangers to the rules, played up well, ably assisted by W.J. Baker. For Redfern, J. Mulcahy and North played well, whilst for the Wanderers J. Fletcher, Harbottle, and M'Donald, were in grand form. (SMH, 28 August)


The Wanderers name pops up in match reports throughout the rest of the decade. In 1888 a healthy competition seems to have been established in the Sydney region, one which is oriented significantly to a Scottish sensibility (thereby marking a long tradition in Australian soccer). The following article suggests that up to fourteen clubs, including the Wanderers, were active in metropolitan NSW at this time.

The annual meeting of the Southern British Football Association was held on Tuesday night, at Hodge's Commercial Hotel, Mr. John Wallace occupied the chair, there being about 25 members present. The annual report stated that a new series of rules had been drawn up on the lines of those used by the Scottish Association, certain alterations being made to suit the game here. During the past season there were seven clubs in the association, viz.:- Parkgrove, Granville, Rovers, Wanderers, Caledonians, Hamilton Athletics, and Pyrmont Rangers, whilst almost an equal number did not join, but two of these - Bulli and Joadja - have joined for this season.

Yet from here the Wanderers name appears to fade from the records. Indeed, a subsequent use of the name in July 1888 is in reference to the Parramatta Wanderers, a Rugby team!

While the archives are sketchy, Phil Mosely's brilliant thesis, 'A Social History of Soccer in New South Wales, 1880-1957' gives a good coverage of the early history. We learn from it that the first Sydney Wanderers were a spent force by the 1890s. Maybe their spirit lived on in the Auburn Wanderers (referenced in 1893 and 1898) and the Balmain Wanderers in 1899, but it is hard to tell. Nonetheless, the Wanderers were a substantial force in the establishment of soccer as a competitive and organised sport in Sydney - no matter how historically fleeting their presence.


There were plenty of candidates for the new name of the West Sydney Club. None of them, however, had the claim to history that the 'Wanderers' has. Whether this was a good point or not was not for me to decide. There are many other names and arguments that needed to be looked at. But I'd love to think that a sense of this history is what gave the name the edge. What I do know is that I and some other (though by no means all) soccer historians are pleased that an acknowledgment of the game's historical roots and longevity have been made in the naming of the Australian soccer's newest professional club.
Posted by Ian Syson at 12:30