Walter is picking me up and we will arrive at Lightwood Park around 2.15. If the referees are as consistent as the others this weekend that should give us 20-25 minutes before the game starts!

I haven't seen either of these teams in action before. Nor have I been out to Kingborough. So it's a new experience for me.

Club histories taken from their sites.

Kingborough seems a fairly hybrid club with a number of merged influences whereas Olympia is a Greek-founded club, one of the several continental European teams established in Hobart in the late 1950s/early 1960s.

Kingborough Lions United Soccer Club resulted from the merger in 1998 of the Kingborough United and Caledonian Soccer Clubs (renamed West Hobart Lions after the banning of ethnic based names by Soccer Australia).

Kingborough United was a long standing strength in the southern-based Premier League and was the result of several previous mergers. Caledonian Soccer Club (West Hobart Lions Soccer Club) was one of the longest serving clubs in the Tasmanian State League. The Club initially had a very large component of Scottish players; however, over a number of years Scottish migrants to Tasmania gradually diminished. During its forty years the Club had many temporary homes but had yet to establish permanent facilities. Training was undertaken at West Hobart Oval.


Hobart Olympia was founded in 1960. Its first season of play was 1961 in Division one where it finished on top of the league thus gaining promotion into the Premier Southern league. The club after its first season had won its first premiership. Little did its supporters know that there were many more to come. In fact by the end of the decade we proved to be the most successful football club in Tasmania given the club had played less than 10 seasons.


Neither team is travelling particularly well, with Kingborough having drawn five of its nine games so far and Olympia with 6 losses. There have been goals aplenty in their games so far as well with a averaged for and against of 18/19. Everything points to a 2-2 draw or a squeaky 3-2 win to Kingborough!

Arrived earlier than expected and made our way into the media box. A lovely long black provided by Kingborough president Brian Dale. 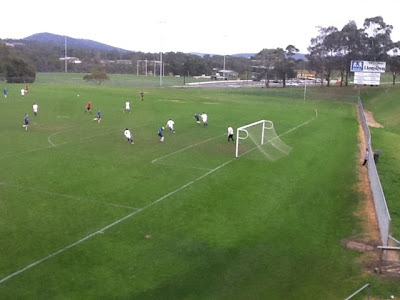 Kingborough  reserves up 2-0 and seem to be comfortable. Not much time to go now.

All over. Kingborough reserves win 2-0.

Sweep in the media box: $5 in; winner takes all.

3.07. Olympia fluffs one after keeper parries cross from right. Wadawu robs keeper and pops it in. Ref gives foul.

3.12. Screams for Olympia pen. Free kick just outside box. Crossed and headed over

3.15. Olympia cross from left. Free kick to Kingborough. Consensus in media box that Olympia on top.

Olympia finish the half strongly after looking like succumbing early. If the score stays as it is I win the sweep so let's hope that the coaches suggest that defence becomes a priority!

3.41. Olympia corner from left. Cleared. Ball back in too wide. Out for goal kick.

3.43. Good through ball to meredith nice centre to Woolley who fluffs it in front of goal. Strange because he's looked so good all game.

4.01. Very long kick by o keeper. Wadawu runs on to it. Cuts back in. Crosses. Defender nearly mucks it up. Keeper gathers.

4.09. Kingborough cross from left. Just evades striker at back post. Out for goal kick.

4.10. Olympia through ball. fielding too slow to react.

4.11. Woolley off for Grillas. Universal inability to comprehend in media box. Woolley their best player.

4.13. Defensive error from Olympia. Nearly costly but cross is wayward.

4.18. Kingborough in clear. Keeper saves from Cooper in one one one. Corner.

4.23. Olympia attacking throw. Out for goalkick.

A pulsating game in the end. Olympia should have won it. Though kingborough had their opportunies as well.


I enjoyed it but I'm not sure these teams would go well against the South Hobarts and New Towns.