I promised myself when I came that I'd get to see a game at Kelvedon Park and also get to see some non-Premier League games. It's taken me a while (with only one weekend to go) but I will get there this afternoon for the Division 1 clash between Taroona and Metro, which starts at 2.30.


Taroona was founded in 1972 out of the disbanded Taroona Ajax Soccer Club and immediately made an impact on southern soccer circles by winning the Metrolpolitan League Division Two. The club gained promotion, but due to dramatic personnel changes they were relegated the following year and even failed to field a senior side in the 1976 and 1977 seasons, entering only junior sides.

Nonetheless I get a sense of the club's founding as a Dutch Club, a momentary collapse and a brief period when it played under the banner of Taroona St Mirren.


Metro Claremont was founded in 1941. It isthe second oldest surviving club in Tasmania. Its formation came aboutthrough the hard work of Cyril Parks, Alec Stuart and Hugh Blackburn,dedicated followers of the British Code and keen to organise a side inthe New Town Metropolitan area. The name has no ties with the HobartMetro bus service as some onlookers outside the game may think.Many Metro players in the early days were former students of the HobartTechnical College, New Town (nowadays New Town High School).
Adapted from Chris Hudson's A Century Of Soccer 1898-1998 A Tasmanian History


Metro is a club with a great history that probably considers itself as having come down from greater heights. As a Sunderland and South Melbourne supporter, I have an inkling of just how they feel. (For those who think lower mid-table in the EPL is not really all that low have a look at this, Sunderland's sixth championship in less than 50 years. In 1936!)

Taroona is coming off two losses and Metro hasn't picked up a point since April.

Walter Pless has this preview on his web site:


Fifth-placed Taroona host sixth-ranked metro at Kelvedon Park at 2.30pm tomorrow in what should be a fiercely contested game.

Andrew Tye, the Taroona coach, is a former Metro player.

“Our side to meet Metro this week has undergone a number of changes for varying reasons including availability and injury,” said Tye.

“Rob Hortle comes in to the side for his first start of the year as a result of an injury to John Burridge, while Hugo Luttmer, Gary Hamilton and Darragh Carey also return.
“Hugo’s inclusion bumps the average age of our side up to 22, which shows that the team is still relatively inexperienced, but with youth comes energy, enthusiasm and an eternal optimism.

“Whilst our last couple of weeks have been poor, the team has trained well and are a talented enough group that I feel 90 minutes of consistent football is just around the corner.

“Metro are a team that will always provide a stern contest, as they showed in our last match, where they came from behind to beat us.

“They have players that can hurt you and are particularly strong in the air. We will have to be at our very best to beat them.”

I'm looking forward to going to my second favourite ground in Hobart for the game today. Blogging from about 1.45. 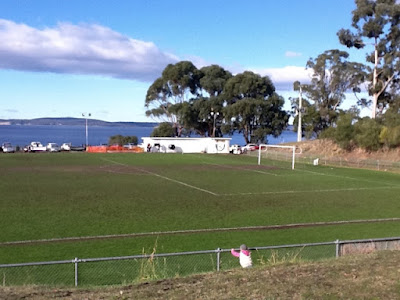 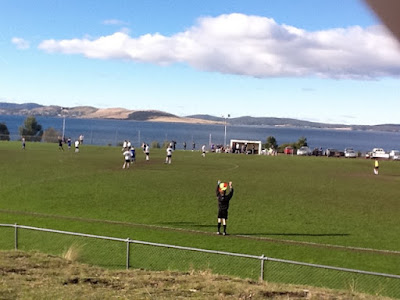 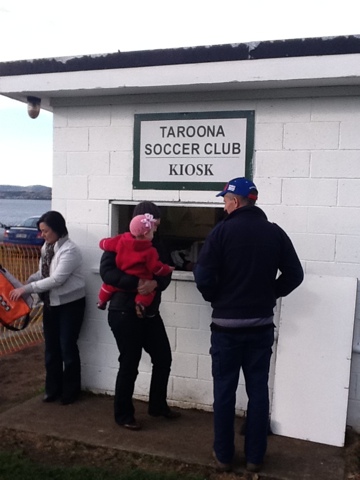 Just heard a very relaxed rendering of the taroona victory song. Based on horto magiko!! . . .  No. Actually the south Melbourne footy club song. 'Thunder from the sky etc.'

Glenorchy knights still with the best song in Hobart!

2.32. Taroona corner left. Comes to nothing. Taroona attack right. Out for gk.

2.35. Metro counter. 19 shoots from left across keeper out for goal kick.


2.37 Taroona corner left. Through to right wing. Crossed back. Shot over. Goal kick fired back. Another goal kick.

2.38. Metro counter. Mix of poor and strong defending. Cleared and comes back to keeper.

2.40. Metro kick midfield. Comes to nothing.

2.50 Taroona attack. Accidental handball. Seen them given before. Could've been a pen and game over.

2.57. Metro through ball too hard. Keeper gathers.
3.03. Metro midfield starting to get some possession but not giving good final ball.

3.07. Taroona cross from right. Too long. Behind for goal kick.

3.10. Good work by Taroona down left. Puts wide when should have scored.

3.12. Taroona build down left. Sustained attack. Comes to nothing.

Good moment when the ref suggests two players should get off the field and take up boxing instead.

Pretty willing so far without either side settling.

3.48. Taroona no 10 gets space down right. Has trouble crossing. Seems hampered by injury.

Game is a bit formless at the moment. A lot of undirected overhit balls.

3.55. Taroona corner right. Too long behind for goal kick.

There's a older silver- haired Geordie playing for m. Everything he does drips with residual quality. He'll deliver a killer ball soon.

4.00. Equally good save other end. Ball coming back and keeper puts around his left post. Corner comes to nothing.

Probably a fair result. Even though Metro started to work better in midfield as the game went on, Taroona had the better chances and put three of them away. Metro keeper had a good game so it could have been worse.