The White Eagle Soccer Club idea was conceived in 1960 and the Club was formed in 1961 under the auspices of the Polish Association based in New Town. It was registered in 1962 by the TSA to compete in the Metropolitan League, finishing in second place and winning its Knockout Cup that same year. The side was coached by Jan Zuraszek (he was also Club captain). In 1971 Jan Zuraszek had a perpetual trophy for the "Best & Fairest" senior player named in his honor. He died in a car crash in Melbourne in 1970.

Interestingly the very first game of soccer contested by clubs in Hobart involved New Town FC. But the Eagles would be stretching things to claim that history. New Town FC became what is known today as Glenorchy Magpies footy club. I wonder how many Magpies supporters know that their club played soccer before they played Australian rules!


The Croatia-Hobart Soccer Club was founded in 1956 when a group of young Croatians kicking the ball around on Cadbury's Reserve after work each day decided to form a club. Friendly matches were held againstother clubs until the club was registered and joined the Tasmanian Soccer Association in 1957 in Division Two. Hard work and enthusiasm enabled the club to develop and eventually win the 1959 Division Two premiership. This led to promotion in 1960 to the highest level of competition, being the Southern Premier League, where the club has remained ever since.

Arrived early. Took lots of nice photos of yet another beautiful soccer setting in Hobart, Clare Street before the clouds crept over - and lost the lot due to an iPad malfunction.

Knights Reserves win 7-2 after a close first half.

Clare street is a cricket oval in summer and so the centre of the field has a wicket square. It didn't seem to affect the play in the reserves game.

Glenorchy Knights reserves celebrate with a song sung to the tune of 'Botany Bay'! Link to PDF

2.50. Eagles attack. Keeper comes out too far. Could have caused problems but shot wide.

Eagles getting into the game now. Some good runs up front.

Game heating up. some good tussles


Flat period in game.I tuned out for 5 minutes there.

3.10. Eagles attack on left. Good lead up and keeper comes out bravely.

3.15. Eagles attack again. Put behind for left corner. Cleared. Ball comes back in. Foul on defender in area.

3.21. Repeat. Good cross this time. Put behind for corner. Eagles have trouble clearing. Another corner.

3.26. Another Knights attack down right. Winger overhits and ball goes behind.

A game that started brightly seems to have gone with the weather. Eagles possibly looking more committed in attack. But Knights forays down right wing suggest they are definitely still in it.

Chris Hey, Knights coach roasting his troops at half time. "You're playing as individuals."

3.49. Eagles attack down left. Good work but Peters out.

3.55. Knights attack left. Corner. Beats a number of defenders but forward unable to get enough on it to beat keeper.

4.05. Another goal to Eagles. Forward waltzes through uncommitted defence and scores easily. 3-0.

4.07. Attack by Knights. Cross from left goes behind.

4.10. Eagles corner from right. Blasted over from left.

Eagles now attacking at will. 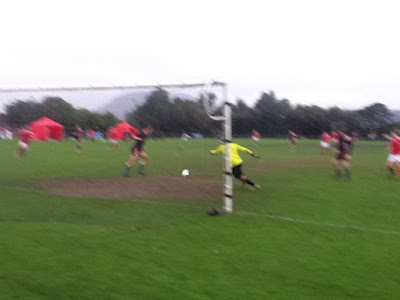 Too easy now for eagles.

A disappointing contest in the end. The Knights looked good at first but seemed to lose interest at times. Coach Hey was pretty disappointed with the effort, especially in the wake of the cup victory against South. Warned that Uni were only a couple of wins away from putting his team into last place.