Yesterday a clash of the cellar dwellers. Last night a middle-storey battle. Today a visit to the Penthouse. South Hobart basically get their chance to establish a 7-point break on all opposition today. A position from which they would almost certainly win the league. The Eagles get a chance to narrow the gap to 1 point.

Hopefully it'll be a cracker. I'm going for Andy Brennan to break his drought in a 2-1 loss for South.

I'll blog it from about 2pm. The game 'starts' at 2.30 -- but if you believe that will happen I have a plot of land on the moon to sell you.

Very physical game predicted by someone who should know. 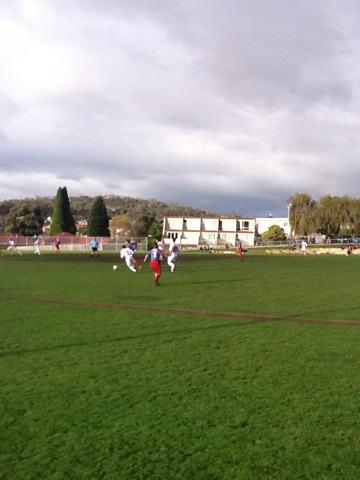 Things have quietened down now.

3.05. Brennan tries from too far out. Doesn't get the power of the shot when he scored.

3.08. Good work south on left. Cross over not met by Morton.

3.12. Brennan shot into side netting after rounding keeper.

3.18. South corner left. Cleared. Worked back to right. Brennan put through but can't beat the ball to the goal line.

3.20. Brennan crosses in to ludford. Good save from close.

South starting to dominate. Eagles only getting forward on the break.

Good game so far. South looked the better team but Eagles defending well. But for a Keeper error eagles would be two up.

3.39. Good attack by eagles down right. Cut back. Shot from left just over.

3.54. Good lead up work by eagles. Cross from right and forward just fails to get enough on it. Goes behind.

3.56. Scott hurt in bad tackle. Yellow to south player. Could have been red. Scott returns to field.

3.59. South cross from left. Too hard and goes behind.

Game now a bit of a to and fro struggle. Engrossing.

4.10. South corner left. Put behind for another.

4.20. Eagles break down right. Last ditch tacle out for corner.

Good enjoyable game. Eagles deserved it from their 2nd half performance more than the 1st. The result also breathes some life into the Southern Premier League. South have buckled three times recently when facing good teams who seem to want the game more than them.