Towards a History of Soccer in Mount Isa

This is another one of my work-in-progress articles. Following on from a previous piece on my personal experiences of soccer in Mount Isa, this is a more sequenced revelation of articles and photographs in the town. I'll be adding more material as I find it.


The residents of Mount Isa are indeed keen on sport and despite the dust the recreation ground sees the Soccer teams on Saturdays and the League game on Sundays. Thanks to the splendid response from the Mount Isa Company, the improvements to the grounds will be commenced next week and it is to be hoped that the improvements will be completed be fore the return match with Cloncurry.
Townsville Daily Bulletin 15 July 1929 p 12

A correspondent at Mt. Isa writes: On Saturday last the Mt. Isa soccer association held a social at Hanlon's Cafe, and a very enjoyable evening was spent. Good music was supplied by Mr. H. Shaw and Mr. S. Martin. Mr. E. Thomas congratulated the premiers and presented the trophies. Mr. Panak congratulated Mr. Thomas, and Mr. Earl, chairman and secretary on their good work during the past season. There is no doubt these two men have worked hard, towards making a success of the game in Mt. Isa. We have had three teams here for the past three years, it is pleasing to see how popular soccer is becoming In the Isa. It was with sincere regret we learned of the proposed departure of our chairman, who is very popular amongst the boys, and it is to be hoped he will be with us again next season.


Sport is not overlooked at Mt. Isa. In football the Rugby and Soccer games are played, and there is tennis and cricket.


The soccer match which was played between Thistles and Magpies on Sunday 22nd. July proved very exciting,   the half time scores being one to nil in favor of Magpies. The Thistles began to warm up towards the end, but   could not hold their opponents the Magpies winning by 3 to 2. Mr. W. Middleton was the referee and gave every satisfaction.


The soccer teams, Rovers and Magpies, met on Sunday last an excellent game resulting in 4 to 3 in   favor of Magpies, and giving this team a fair chance of winning the cup. At times sparkling play worked spectators into excited action, and at times it looked as though Rovers would over-run their opponents. Mr. Middleton gave every satisfaction as a very Impartial referee.


The Soccer teams, Thistles and Rovers, met on 8unday August 26th to try conclusions, and at times it would appear that the Thistles would conquer, but the final scores were one goal to nil in favor of Rovers. Mr. Mlddleton as referee was most impartial. All the players appear to be keen on making the trip to Cloncurry on September 9th.

At the conclusion of the soccer and football season the association held an evening in Smith's Hall on the night of November 26. Mr. R. A. Clarke presented the Secretary of the association (Mr. S. Budd) with an inkstand which was donated by the three teams which competed In the games. Mr. Rudd was also the recipient of a pair of cuff links presented by Mr. Ireland on behalf of the underground team. Mr. Rudd in acknowledging the gifts paid a tribute to the energy exercised by all who took part in the soccer game.


There was a very large gathering of soccer players and supporters during Saturday night in the C.W.A. Hall, when the trophies won for the season just ended were handed across. The Corinthians won all three trophies donated by Messrs F. Tadman, H. Smith and Jeff Willan. In the absence of Mr. Harry Smith, who donated the shield, Councillor Norman Smith presented the handsome shield and, In presenting it to the captain of the winning team (Mr. Fairbrother) said the feat was extraordinary, as the Corinthians had won all three trophies donated. He paid a tribute to the players, who had given their best in securing the coveted shield and hoped it would infuse zeal in the years ahead for other teams. Captain Falrbrother suitably acknowledged the trophy on behalf of his team. The evening was then given over to dancing and musical items. Musical Items were rendered by Mr. B. A. Clarke, mandolin, and monologues by Mr Chas. Gray.

1400 MILES FOR SOCCER MATCH. MT. ISA. August 15. The Mount Isa Representative Soccer team has returned to town after travelling 1400 miles to play a representative Ingham team, which was defeated by 4 to 2. The Ingham team comprised nine Italians, a Spaniard, and one Chinese.


On the night of 30th September, In the C.W.A. Hall, the presentation of trophies won by Soccer teams took place, and were presented to the various clubs. Councillor R. Clarke presided and called on Mr. MacRae to present the Llttlejohn Cup, which had been won by the Rangers Club. Mr. Bob Lawson, in accepting the cup on behalf of the captain (Mr. Les Rudd), of the Rangers, thanked Mr. MacRae on behalf of his team, and said that it was the second time the club had won this cup. The Gray Cup, which was donated by Mr. Charles Gray, was then presented by the donor to Captain Fairbrother, of the Corinthian Club. The speaker congratulated the captain on the success of his team In winning the cup. In responding. Captain Fairbrother thanked Mr. Gray and paid a glowing tribute to his club-mates for the harmonious spirit that existed through out the season. The Jeff Willan Cup was also won by the Corinthians, and will become that club's property tor all time. Mr. Jim Burton accepted the cup on behalf of Captain Fairbrother. The Sari Castle Stewart Cup was also won by the Corinthians and Captain Fairbrother very modestly asked Mr. E. Brewer, a club-mate, to accept the gift. Prior to presenting the cup, Mr. S. Rudd, the president, said that when Earl Castle Stewart was at Mt Isa, despite his handsome donation to the R.S.S.I.L.A., he approached the Earl and asked if he would donate a trophy to the Soccer Association, and the result was the beautiful cup he now asked Mr. Brewer to accept on behalf of his club. Mr. Brewer briefly returned thanks to Mr. Rudd. Councillor Norman Smith was next called on to present the shield that he had donated to the winners of the premiership. He congratulated the underground team in having won the premiership and asked Captain Perry, of that team, to accept the shield. The speaker spoke glowingly of the club's performance, and congratulated play ers on their win. He also referred to the great distance the soccer players had travelled to play a match at Ingham. Captain Perry, in accepting the shield, thanked Mr. Smith in suitable words. During the evening Councillor Clarke entertained the gathering with many popular airs on his banjo mandolin, and Mr. Kerwin, conductor of the Paramount Band, also pleased those present with numerous melodies, on his piano-accordeon. A feature of the evening was the singing of Mr. Pat Harris, a tenor, late of the Adelaide Repertory Company.


reference in Cloncurry Advocate 8 March to the new season

The Canberra Times reported on an active internationalism in Mount Isa. Soccer gets a mention but not before the Hungarian cricket team.


On the sporting side new Australians have come to the forefront in many fields. They are also trying their hands at typically Australian games such as cricket. The Pannonia Cricket Club is almost totally a New Australian Club. They are also giving zestful performances on the soccer field and are represented in every local soccer team.

Upsurge in junior soccer. The U16 Sparta team visted Ipswich and Brisbane with some success.

The following is excerpted from MIMAG June 1962:

Today, soccer is big business all over the world. Fantastic sums of money are paid on transfer of top quality players from one team to another. Literally millions of pounds are spent annually on football pools, based on the results of league and cup matches. Players are ‘stars’ and ‘specialists’, and are treated as such.

In Australia, soccer, started as early as 1880. In 1882 the New South Wales Soccer Association was formed, quickly followed by other States. The Australian Football Association was formed in 1921. Australia entered the international field in 1922. Competitive matches between States began in 1929 when England presented a Soccer Trophy. After the Second World War Australian teams entered both Olympic and World Cup competitions.

Soccer was played in Mount Isa right from the early days, although there were no organised form until approximately 1936 [probably an error, see 1934 above]. During the war many matches were organised with armed services teams and competitive play was wide spread.

The game lost its organised form for some years after the war, but in 1953, organised soccer was again instituted with its clubs playing knock-out games. These were Scotties, Pannonia, St. Helens and B.S.D. The following year the Mount Isa Soccer Association was formally inaugurated and the popularity of the game was high. During a two-day soccer carnival, teams from Ingham played against Mount Isa. Five local teams were in the field.

Touring was again in vogue in 1955 when an Isa representative team went to play in Townsville.

The game continued to climb in popularity in 1956 and Wellington Oval became the venue for Sunday matches. Six clubs played that year. The two new ones were Mt. Oxide and Shamrocks, formed from the old B.S.D. Club. Townsville returned the previous year’s visit and lost 4-1 to Mount Isa.

Today soccer football continues to thrive. The year 1961 saw an upsurge in junior soccer when a representative team of lads under 16, mainly from the junior champions “Sparta” toured Brisbane and Ipswich with considerable success. Cor Valkenburg, a former Pannonia goalie from the early days, travelled with and managed the team. This year saw the introduction of “B” division matches and the further development of junior soccer, with more and more schools interested in competitive play. Improved conditions at Wellington Oval and the promise of floodlighting for evening play will see further expansion of interest in the game. The main clubs are showing a keen interest and the omens are good for a season of really fine sport.

The season officially opened on Easter Sunday with a match between well balanced teams representing the British Commonwealth on the one hand, and the rest of Europe on the other.

League play this season centres on four main teams, Scotties, Brittania, Pannonia and Concordia. Players like Joe Mezes of Pannonia, Peter Houghton and Joe Wicks of Brittania, Peter Wendt of Concordia and Adolph Nimaus and Bert Harding of Scotties, were well worth watching last year and are proving as good again this season. Bobby Moore of Scotties, continues to amuse as well as to shine. All sections of the community are gloriously intermingled in these teams, with the Company’s Mining Department seemingly supplying the bulk of the stars. Alex Pavusa and Bobby Cairns are our leading referees in the current season. 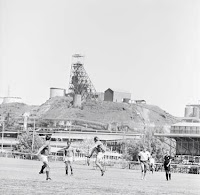 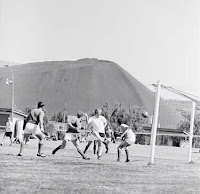