BRITISH ASSOCIATION.
FOOTSCRAY THISTLE WINS DOCKERTY CUP.
Mention of the English "Cup ties" and "finals" were revived on Saturday, when Footscray Thistle played Windsor in the final for the Dockerty Cup at Middle Park, in the presence of a large crowd. Footscray, aided by a strong wind, led at half-time by 1 goal to nil. In the second half, with the wind Windsor attacked, but Footscray broke away, and in an endeavour to clear, Tunn kicked the ball through his own goal, adding another to the Footscray lead. From this on, although Windsor had all the advantages, they failed to give the Footscray goalkeeper anything difficult to handle. When the whistle blew the score remained unchanged, and Footscray won, 1 goal to nil.


Followers of the Soccer game on Saturday witnessed a stirring match be tween the Dinmore Bush Rats and the Bundanba Rangers, who won by 4 goals to 3. At half-time T'Rats were leading by 3 goals to 2, but T'Rangers put it over the Dinmoreites in the next half, scoring 2 goals. 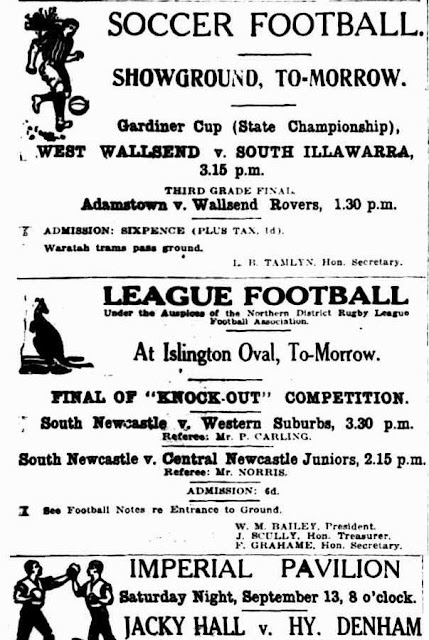