Day 5: On Our Way to Wembley

The seemingly indefatigable Todd Blackwell picked me up from the Premier Hotel at 930 on 17 September and we drove through light Newcastle traffic to Johnston Park, the home of Westy, West Wallsend FC.The ground reminded me a little of some outer suburban Melbourne grounds that are nestled in bush settings.

However, this one - affectionately known as Wembley (some wag's response to another ground in Newcastle being named Crystal Palace?) - is different. It has the feeling of historical permanence. It's been here a while and is not going to be used for any purpose other than football in a hurry. It will be getting a brand new electronic scoreboard (situated to the right of the photo) in the coming months. The board will be named in memory of the young club rising talent Jaryd Hayter who died tragically at work. 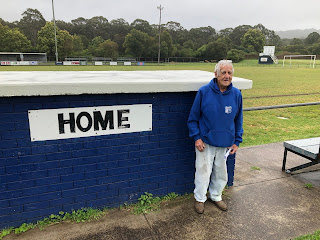 I travelled to Wembley as part of my ongoing process of trying to come to grips with the strength of Newcastle soccer culture. Here I met Bob Hepplewhite (groundsman, caretaker, club legend) who led us around the clubrooms with a torch (power was cut for repairs). Bob apologised profusely for this and for the fact that the club hadn't seemed to have retained the trophies and memorabilia collected through the years. He showed me a couple of good photos and some trophies that needed a bit of a polish and we went outside into the light. 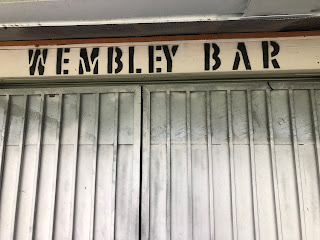 Of the stories he told us my favourite was of Reg Date, the legendary Wallsend player against whom Bob had played as a young man. Reg said to Bob, "If I kick the ball in your direction, you better get out of the way. You might get hurt." Bob responded dismissively, until he saw close-up the power of his kick. Reg could break nets with the ferocity of his shots and so Bob was indeed careful.

But more that the story, Bob made me realise just how embedded in the game's history he and his old club are.

Later in the day I contacted club secretary Megan Crowhurst and she sent me some good photographs but I imagine that of the hundreds that have existed only a fraction remain available. Four of these are presented below. They are particularly useful to me because they reveal images of some of Westy's Anzacs.


Of the 1913-14 Westy NSW Junior champions team, Cantello, Clapham, Jim Leckie enlisted and died at the front. It is likely that others also joined up but this is yet to be ascertained.