Mark Boric tweet inspired me to return to a very early part of my research. He pointed out that some more material was coming online in Trove relating to Mildura -- so I went and had a look.

Unfortunately it's not yet fully online -- we can only see previews. But the propects are interesting.

It nonetheless got the juices flowing.


Tantalisingly, in an 1891 summary of the football season there's a reference to 3 English men taking up the Victorian game:

I think a word of praise is due to those three English players, Langstaff, Reid and Evans, for the manner in which they have picked up the Victorian game; and for the fine form they have displayed.

This raises the idea that there was indeed a cohort of English sportsmen in the region, some of whom might have been ready to play their game. Indeed it seems there was. In 1892 we read the following


Mildura Cultivator, Saturday 13 August 1892, page 3
Football under Rugby rules in Victoria is a novelty. The Australian game reigns supreme. Rugby is the popular form of this pastime in the United Kingdom, New Zealand, N.S.W. and Queensland, but you must not talk Rugby in Victoria. Indeed, I don't know where it would he tolerated in this colony if not in Mildura. You see, Mildura is novel in itself. The conditions, social and industrial, are so very different from those prevailing in other parts of Victoria. There are many young English men here, fresh from the schools and colleges, who want to preserve their accustomed games in this new sphere of their operations. And it is only natural that they would not give up their beloved Rugby for the hybrid Australian game. Several of them resolved to show the cdolonias the superiority of Rugby, and a match was arranged last Saturday to be played under Rugby rules between the town and coantry. There was a fair roll-up of spectators to see the fun, and the Hospital benefited by the proceeds. Whilst the country team comprised all country men, the town teams had to draw on some of the latter; but every player woas not an Englishman. Perhaps the Englishmen and Australians were balanced. Only a few of the Australians knew the rules, which made much sport for the onlookers. The game was rough-and-tumble from start to finish, and the general opinion was that whilst it furnished plenty of fun for the spectators, it was much inferior to a game ender the Australian rnles. However, as no particular rules were maintainlcd and as the game certainly could not be called Rugby football, which requires some skill as well as staying power and strength to play it properly, a fair estimate of Rugby could not be made. The town team was supposed to have won.

What about soccer then? It seems it's not until 1895 that the game takes off (significantly at a time when it is dead in Melbourne).


Mildura Cultivator, Saturday 18 May 1895, page 9
ENGLISH ASSOCIATION. A scratch match, under the foregoing rules, will be played on the Recreation-ground on Friday, May 24th, starting at 3 p.m. Teams will be picked from the following:--Alder, Barton, Cunningham, Hedley (2), A. Henderson, Izard, Johnstone, Murray, McLaren, Newman (3), G. Nevill, Reader, Short. J. Smith, H. Smith, F. Southee, Tilley and others.

This is followed up with a report two weeks later

Mildura Cultivator, Saturday 1 June 1895, page 9
Queen's Birthday Entertainments. The town presented quite a deserted appearance last Friday, as most of the inhabitants were holiday-making. Besides the well-attended picnics held by the Congregational Sunday School and the Salvation Army there were several other attractions. Enthusiastic sportsmen enjoyed a good day's shooting and bagged numerous ducks and other game. An enjoyable afternoon was spent by supporters of football in watching a well-contested match played inder English Association rules on the Recreation-ground, when Mr. Alder's team beat Mr. Newman's team by two goals. Several cyclists visited Wentworth to take part in the programme of the Sports' Club. The mile bicycle race was won by Barnsley (110 yards), Pugsley (45 yards), second, and Hawkins (scratch), third.

This seems to establish the game of soccer in Mildura. But can we be sure that this is the starting point?

The following year occasional games were played between Mildura and Renmark

Mildura Cultivator, Saturday 11 July 1896, page 7
The Gem on Monday took away as passengers, Mrs. Nash and Miss Miller. and also Messrs. Alder, Smith, Newman(3) Hawkins, Linton, Henderson, Hoops and Hedley, who are proceedrling to Renmark to play a game of Association football against one of the clubs in that settlement.

Mildura Cultivator, Saturday 25 July 1896, page 9
With only one football club playing under Victorian rules and another practising the English Association game, there is very little life in local sporting circles.

Mildura Cultivator, Wed 6 September 1911, page 7
Though the football season proper is ended, it is proposed to arrange a game of "Soccer" in aid of the Hospital. Messrs Dawes and Keil have the matter in hand and have already received the names of some 14 or 15 players of the English Association game. They will be glad to get other names, on receipt of which they will arrange and announce the event. It is a long time since we saw a game of "soccer" in Mildura, so it ought to attract a crowd.


Following this there were more game in September and an association was formed.

From this point a fairly strong local culture starts to develop. Two, sometimes three, teams and a strong committee, organising games, working bees and so on.

This is all of course brought to a shuddering halt by WW1.

I've spoken on this many times. Up to 10 of the Irymple team and several Mildura players are killed during the war.

Understandably, the game is slow to begin after the war

I had orginally thought that it was not until the late 1920s that soccer started to re-emerge. This is where Mark's tweet is important. It alerted me to the Sunraysia Daily coming online on Trove and it indicates that the game splutters into life again in 1922 with teams eventually forming in Cardross, Cardwarp, Redcliffs and Mildura -- but sadly not Irymple. I have to wait until the articles are fully linked.

I'll finish with a sad story that has a degree of symbolism.


Barrier Miner, Tuesday 7 June 1927, page 4
Death AT SOCCER MATCHCOLLAPSE OF UMPIRE AFTER BLOW IN STOMACHMelbourne, Tuesday.While umpiring a Soccer match be-tween Mildura and Melbourne at Mildura yesterday Enoch Blount (46) collapsed and died. Blount, it was said, was struck in the stomach by a ball. The match was abandoned.

Melbourne proved too good for Mildura in Saturday's Inter-Association game at the Amateur Sports Ground. Above are scenes and incidents in the game, including, from the left, the referee and his friends, the Melbourne team. Bottom row: the Mildura team and, on the right, some of the residents who accompanied it. 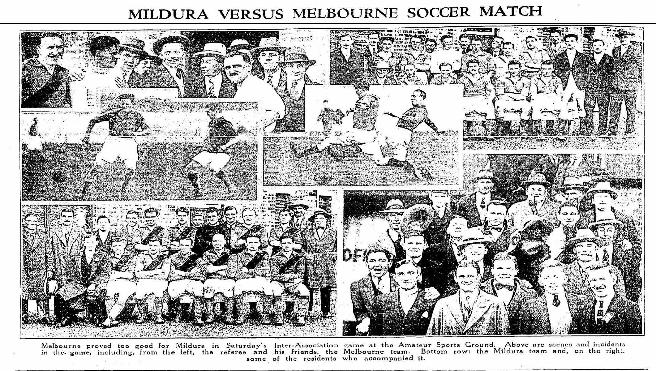 From this point there seems to be little in the way of club competition and only the occasional inter-town games with Broken Hill until WW2. A story that's repeated across reginal Australia.

Australian soccer history really is a tale of two countries.

SOCCER IN MILDURA
By SPECTATOR


I was very pleased to notice an advertisement calling lovers of Soccer to meet at the ground in Ninth Street tonight. As many friends from the old country are in Mildura, there should be a good muster. Last year's season was very short, leaving the honors decidedly with Red Cliffs. They defeated Carwarp by 2 goals to 1, and then finished Mildura by 5 goals to 1. But Mildura rapidly improved, and in the next two games Red Cliffs won by 2 goals to 1, and the second game was a draw, the score being 1 all. With an early start this year a better season is augured. It is pleasing to note that Mildura has still some of its good players living here. I notice a formidable half-back line (A. McLean, W. Wolstenholme and "Jock" Smith) are ready for the fray. But as Charlie Grant is a good centrehalf, I would advise Wolstenholme to go forward as centre. I notice Finlayson is still here to help as inside right, and Wee Jock Sloan to go either in the goals or inside left. He is a plucky player, and has a good eye, but lacks the necessary height for a goal-keeper. If another good goal-keeper is obtainable, it would he advantageous to put Sloan as inside left. As left wingers are scarce, Tommy McLean will be sadly missed. Sturdy J. Blount is still here to strengthen the defence. Who else is here I have not yet noticed; but I think that a formidable team is available. I hope to see a good backing by the people, and if Mr. Harston carries on his secretarial duties as he did last season, a good time is assured.

SOCCER CHALLENGE
Mildura Players Unable to Find Opponents
Like Alexander the Great, who is alleged to have wept because there were no more worlds to conquer, the Mildura Soccer Football Club is badly disappointed because it cannot find any other team willing to play match. The Mildura club has a strong membership list. This afternoon there were no fewer than twenty players on the Ninth Street ground, all eager for a game, but since advertisements inviting other clubs lo play them have not brought a response, they had to play a scratch match. Now then, Red Cliffs, Carwarp, Merbein! The Mildura club promises good reception and a fair game to any combination pitted against them. A message to the secretary. Mr. G Harston, 64 Lemon Avenue, will start the ball rolling.