SOCCER.
A meeting of the newly-revived British Football Association was held on Monday evening at the Public Library. There was a good attendance of members, Including many of the old players and supporters. Mr. J. H. Storr-occupied the chair. The sub-committee which was recently appointed recommended that the association should continue working on the old lines, which had been so successful before the war broke up the game. It was recognised that the challenge cups and other trophies would be handed over to the revived association. They further expressed the hope that as many as possible of the old members should be placed on the committee. The report generally was approved.
The following officers were elected:— Hon. treasurer, Mr. Harry Parkinson; hon. secretary, Mr. Lambert Morgan. The committee included three members from each club, players or non-players at option, together with Messrs. J. H. Storr, W. H. Benson and W. Jones, with power to add to their number. It was decided, in view of the difficulties of the ferry service to town on Saturday afternoons, to ask the clubs drawn against Lindisfarne to play on the ground of the latter.
A very successful meeting was closed with a vote of thanks to the chairman, who expressed his satisfaction at the prospects of soccer football very shortly reaching the high level it had attained when interrupted by the war. South Hobart Royers v. Lindisfarne play at Lindisfarne to-morrow afternoon at 2.45 o'clock. South Hobart Rovers from: B. Stuart B. {Marley, H. Morrison, J. Morrison, W. Williams, T. Hudson, G. Shirley, W. Webber, G. Cracknell, H. Martyn, C. Inman, V. Vout, E. - Shirley, F. Fry, E.  Manson, G. Griffiths. 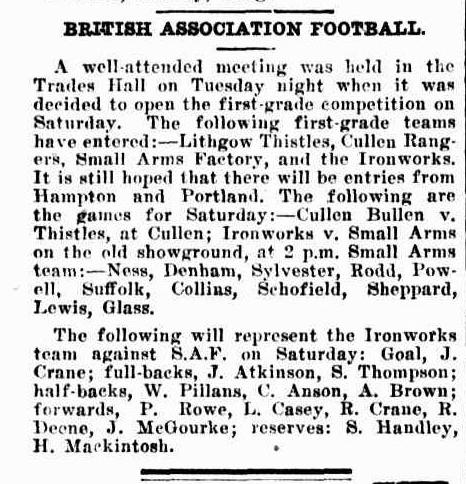 Starting from this week the Show Ground will be used by the Soccer Association.
The chief fixtures this week will be at the Show Ground between Adamstown and West Wallsend. This will be their second meeting this season. At Adamstown in the opening game, a draw (two goals each) was recorded. West Wallsend are leading in the competition, but they have played a game more than Adamstown, who are second. Both teams are undefeated.
The Blues will probably play the same team which defeated Minmi with, perhaps, one exception, M'Kay having a lot of supporters over Smith. The final choice only goes to show how strong Westy are when they can afford to leave M'Kay or Smith, both of whom were considered for representative honors last year, out of their team.
Adamstown will not hear of defeat. They think that their defence, which has only been beaten once since their opening game, will be able to keep Coates and company out, while their forwards can easily get a goal or two and so win the game. Whether their ideas will work out as they desire remains to be seen, but the game should certainly be a hard one.
Fix this text