SOCCER FOOTBALL.
There was a large attendance of delegates at the annual meeting of the Northern District Soccer Football Association, held at the Trades Hall on Saturday night. In the absence of Mr. R. Martin, the president, vice-president E. Buxton occupied the chair. The report submitted by the committee was of a highly satisfactory character. The balance sheet showed an income of £699 17s 11d, and an expenditure of £526 1s 1d, leaving a credit balance of £173 16s 10d. It was mentioned that one gate was a State record, while the whole takings constituted a State Soccer record. The report showed that the popularity of the code had increased considerably, which was shown by the greatly Improved gate receipts. Much enthusiasm was manifested in the election of officers; Mr. J. McCartney was re-elected patron, Mr. R. Martin president, and Mr..E. Buxton vice-president. For the position of secretary, Mr. Larry Tamlyn was opposed by Mr. A. Harley, and the voting resulted in twelve votes to three. The result of the ballot had no sooner been announced than the delegates received an unexpected shock, Mr. Tamlyn announcing that he could not accept the position. While he welcomed opposition (which was for the good of the game), he allowed the critics, but time would not allow him to again accept the position to which the delegates had elected him. Most of the delegates, together with the auditors, and members of the committee, expressed the wish that Mr. Tamlyn would reconsider his decision and again take on the duties. While thanking the delegates and others for the complimentary references to his work, and expressions of good will, Mr. Tamlyn said his decision was final, but assured those present that he would not sever his connection with Soccer. He pointed out that the Association had made considerable headway, and he had not the necessary time which the position demanded. It was decided not to elect a secretary at that meeting, but to call for fresh nominations, to be dealt with at a meeting to be held a fortnight hence. Mr. W. Ryshton was elected assistant secretary, and Mr. Shillings treasurer. It was decided to play five grades, senior, second, third, under 18, and under 16, as last year. Consideration of the question of club or district football was deferred until the next meeting. All the matters brought for ward were discussed in an amicable way, and ths prospects of another suc cessful season are particularly bright. This is assuming, of course that Mr. Tamlyn will again take on the secretaryship, if he does not do so, the game will get a big set-back, as there is no getting away from the fact that he is responsible for the proud position it enjoys to-day. When Mr. Tamlyn took over the duties, the association was in debt, but as a result of his energetic efforts during the past four years, he has wiped the deficit out, and the association now boasts of a substantial credit balance. For the sake of the game, it is to be hoped that Larry will reconsider his decision. He possesses wonderful organising capabilities, and the code must have his services and advice.

FOOTBALL BRITISH ASSOCIATION. '"Admlrer of Soccer" writes eulogising the officers of the northern association for the good work performed during the past season, but is disappointed at the secretary tendering his resignation. He says Mr. Tamlyn has done wonders for the game, and in declining to carry on he is taking a wrong stand. The writer considers that Mr. Tamlyn is the man for the position, and having made the associatlon what it is he should not be allowed to leave it: The delegates should make another effort to retain his services. As a supporter of the game, the writer says he wants Mr. Tamlyn to know that the followers of the code should be considered, and hopes that he will alter his present decision. 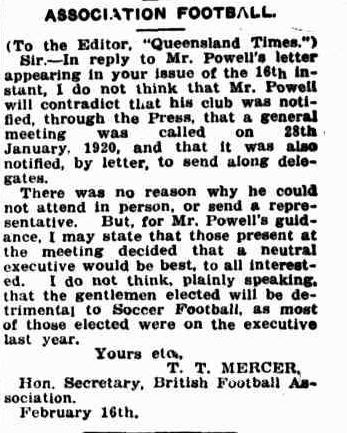 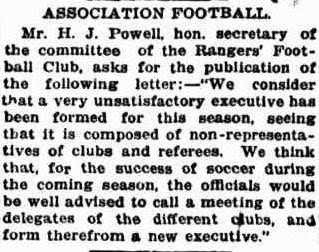 SPOTSWOOD FOOTBALL CLUB. British Association. A Special Meeting of the above will be held on 28th February, 1920, NEAR SPOTSWOOD HOTEL at 7.30, to elect Officers for ensuing season. All persons interested are invited to be present.
J. HEWITT, Hon: Sec.

FOOTSCRAY FOOTBALL CLUB. The ANNUAL MEETING of the FOOTSCRAY FOOTBALL CLUB will be held at the FEDERAL HALL, Nicholson-street, on Monday, March 8th7,-920, at 8 p.m. Nominations for the position of Office-bearers must be in the hands of the Secretary, 26 Austin-street, Footscray, not later than Monday, March 1st. Election for Office-bearers will be held at the Old Mechanics' Institute, opposite the Federal Hall, from 6 to 6.30 p.m., on March 8th, prior to the Annual Meeting. Season Tickets must be produced to entitle Members to vote.
E. J. SMITH, Secretary.
Posted by Ian Syson at 14:13