In an earlier article I looked at the Granville Magpies and argued that the way their war service was reported spoke volumes about the way soccer was embedded in their community before and during the First World War. The Roll of Honour citations for three of the dead Magpies suggested their game was an important part of of their lives and the communities in which they lived. Often the way we write about our dead, especially our war dead, measures our significant cultural practices.

A similar story can be found in relation to another Western Sydney club in the Second World War. The Lidcombe Methodists also provided a good number of soldiers, three of whom did not return. The Cumberland Argus and Fruitgrowers Advocate of 31 July 1940 contained the following report:

The inevitable has happened. Lidcombe Methodist team has been forced to draw out of the first grade competition owing to five of its members joining the A.I.F. Regrettable as it may seem, there is the consolation to its leaders that its eligible members have responded to the call of Empire. (p 4)

Little was the writer to know that many more from the club would enlist over the next few years. In October 1941 The Cumberland Argus told the story of how seven of these schoolfriends and teammates "together since kindergarten" joined up as a group. The important things to note again are how local and embedded these young men are in their communities, how ordinary their jobs were, and how 'typical' they seem. 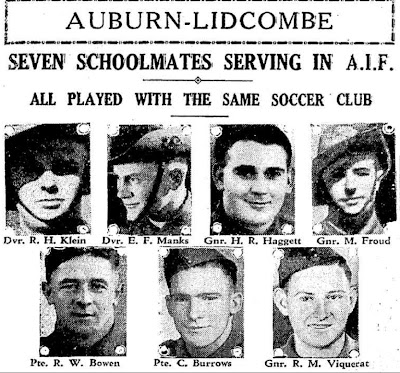 Together since their kindergarten days, these seven Auburn soldiers are all serving overseas with the A.I.F. Mrs. Haggett, of Simpson-street, Auburn, told their story this week; She is the mother of Gunner Haggett. "These boys grew up together and looked upon my house as their own," she said. "They all went to Auburn North School together and played with the Lidcombe Methodist Soccer Club."

"'Bunny' left with the first A.I.F. contingent, and the others resolved to follow him, which they did. "All the boys but mine have met him, but my boy wanted to see him, perhaps most of all. Once in the.Middle East, he missed him by a few hours:" Private Burrows has been through every A.I.F. campaign, and was last heard of in Palestine. Gunner Viquerat and Gunner Haggett went to Syria, but their present whereabouts is unknown. Driver Manks is in Malaya, and Private Bowen, Driver Klein, and Gunner Froud are in Syria. Before enlisting, Private Burrows was employed by the Australian Gas Light Company, Gunner Viquerat was a driver for Schweppes, Gunner Haggett was an upholsterer, Driver Manks was a plumber, Driver Klein worked at the Australian General Electric Company; Gunner, Froud was at the Advanx Tyre and Rubber Company, and Private Bowen was employed on the railways.

"All 'the lads write to me regularly, and now they're looking forward to the day when they stage their big re-union," said Mrs. Haggett. "But there'll be a bigger, re-union when they get back to Aussie," she added, Wistfully.

The mothers of the other boys belong to the W.V.S.


In July 17 1946 The Cumberland Argus contained a follow up piece which told that ultimately 16 players from the club served and three of them (Manks, Moss and Thomas) did not return. Nonetheless the players fulfilled a vow they made to each other to reform the team (as the Auburn District Soccer football club) and play again. No doubt some thoughts for their fallen teammates were part of the process of renewal.


The Pledge Has Been Fulfilled

When 16 members of the Lidcombe North Methodist Soccer Club joined the A.I.F. in a body in 1940, they vowed that all who returned would again team-up together.

Today, the pledge has been fulfilled, and the former comrades on the field of battle are together again on the Soccer field. All but three returned. They were Driver "Joey" Manks (21) who died in Borneo in 1945; Allan Moss, R.A.A.F., killed in, Australia; and Driver Arthur Thomas, killed in Borneo.

Those who returned are now assembled in the Auburn District Soccer football club. Playing first-grade metropolitan league, until recently they were the leading team. They are only three points down now. One of the players said to-day:

"NOT QUITE AS GOOD"

"We're not quite as good as we were-after:all, six years away from the game does mean something. "But we've never been defeated by more than two goals," he added. He spoke highly of club president Perce Bunyan, who, he said, had "rounded up the players, helped finance the club, and got it going again."

"Only for him we would not be where we are to-day. All the boys appreciate his work," he added. Other club stalwarts are vice-president Rowe Denny (First A.I.F.), and secretary Tom Haggett.

Again the beauty of this story lies in its ordinariness: everyday, predominantly working-class Australian men thrust into war and whatever misery, heroism and solidarity they might have encountered in their time in the armed forces. Among the nourishing memories of family, school and friendship they each had soccer as a game that united them, sustained them and gave them something they could return to and ritualise if they were fortunate enough to return physically in one piece.

Soccer was there before they left and it was in place when they returned. And it is still there today at one of its not infrequent peaks in a 130 year-old history of being a vital sporting mainstay of Western Sydney.
Posted by Ian Syson at 22:15